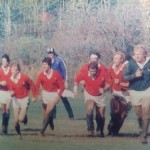 On January 9th, 2008, South Africa named the Springbok’s new coach, Peter de Villiers, to succeed the 2007 World Cup winning coach, Jake White. De Villiers is black. He was coach of South Africa’s 2005 U-19 World Cup champion side. The South African Rugby Football Union admits that de Villier’s appointment was not based on purely rugby grounds. In a complex country with multiple racial categories, former coach White faced continuing pressure to play more “black” players. Has de Villiers stepped into the same pressure or will he be able to pick the best players regardless of race as he claims he will? Time will tell.

The stories of South Africa’s deliverance from the stranglehold of apartheid are many. An interesting local side story about South Africa’s evolution involves the Springbok’s 1981 rugby tour and legendary Louisiana rugby player, Bob “Big Red” Causey. In 1980 Eastern Rugby Union President Tom Selfridge (who had played the Springboks on tour in 1978) arranged for South Africa to play 3 matches in the USA at the end of their 1981 tour to New Zealand. The nation of South Africa was under an international ban from economic and athletic exchanges with other countries. The matches were to be against the Midwest Rugby Union in Chicago, the Eastern Rugby Union in Albany, and the US Eagles in New York. Bob was picked to play in both the Eastern Rugby Union and the US Eagles match.

Rumors of the violent and sometimes bloody protests that followed the Springboks through Kiwiland preceded their arrival on US shores. The midseason baseball strike left sportswriters looking for something to cover. The little known US sport of rugby burst onto the front-page. Protests were organized. The US Olympic committee tried to ban the matches fearing African nations boycotting the 1984 Los Angeles Olympics. Mayor Koch of New York forbade the playing of the match in the city. The mayor of Albany fought the Governor of New York for the right to have the ERU vs Springbok match in Albany all the way to the US Supreme Court and won.

Through metal detectors and onto this pitch of international socio-political-sports attention ran “Big Red”. He recalls the military with guns in the windows of the buildings surrounding the pitch in Albany. The Springboks were huge and carrying a serious attitude of hostility. Many were ex-military with New Zealand hardened game faces. They had played 14 matches – winning 11, drawing one, and beating the All Blacks in the 2nd test by a score of 24-12. They were considered the best team in the world. Peter Jones was ref. At the first lineout Bob’s opposite number is subtly lifted. This a few years before the laws allowed lifting. On the second lineout Bob slips through, snatches the ball, and passes it. After the pass and as play moves to the other side of the pitch, his opponent holds him while the two props land a couple of punches at the same time practicing a new English phrase they were learning, “We will kill you!” Not good at taking a hint, Bob strips the ball at the next lineout. The Springboks showed their famous versatility when they switched and had the props hold him while the second row punched. Their scrum had this straight ahead, old-fashioned low hard maul with very little roll to it. Twice Bob wedged through it to snatch the ball. After the pass the entire South African pack made a special detour to run over him on their way to the next breakdown. The second time he ripped the ball away, he held on to the guy who hit him as he passed. The South African scrummies showed their feeling of equality as they ran over both Bob and their own teammate on their way to the next tackle. Big Red recalls Gary Lambert coming over at this point and saying, “ We are going to get through this.”

In the match Gary ran by Naas Botha (South Africa’s outstanding fly half and arguably the most prolific match winner in Springbok history) after a pass. There was some contact but slight and un-intentional. Later in the match Botha had an opportunity and took it to kick Gary in the head. But the match was not over. Gary got an “opportunity” after Botha made a pass and drove him 10 yards in a bone-crushing tackle. Play stopped. The Springbok forwards surrounded Gary. He wiped his lips with his jersey and strode directly at the biggest Bok and pushed past him. Gary became a focus for a lot of pent-up Springbok aggression after that. The ERU lost to the Springboks 41-0.

After the match Bob recalls telling Coach Hornball that he was through. He wanted his ticket home. DID NOT WANT TO PLAY THEM AGAIN!!!

At this point the protests seemed like a party. There were beer bashes and bands. Pete Seeger came to sing. University students and tv reporters were having a good time. Jesse Jackson (whose protests efforts had been thwarted when the Chicago match was mysteriously switched to Racine, Wisconsin) was busy trying to find where the USA Eagles vs the South Africa Springboks match would be held. The match was scheduled for Saturday, September 26th. Bob remembers a few of the fellow players got together Thursday evening to savor some of the moments and contemplate the next match. They talked about the new strategy – isolate and intimidate.

At 7 a.m. Friday he was awakened and told to get dressed in his game kit and don’t call anyone. They sent the South African players extra US kits, so they wouldn’t be as noticed leaving the hotel. Everyone left in small groups. They drove out of the city until they reached what seemed to be a pasture. It was the Owl Creek Polo Ground. The match was called so quickly and secretively the president of the USA Rugby Union didn’t know it was being held. The match is in the International Rugby Board’s (now World Rugby) data as the lowest attended international match in the history of the sport. Bob recalls a handful of the neighbors who came out and an occasional helicopter flying overhead. As soon as South Africa started their tricks the Eagles retaliated with ‘isolate and intimidate’. The game quickly calmed down and became straight hard rugby. The Springboks won 38-7 in what Bob feels was one of the greatest Eagle efforts. When the match ended and they arrived at the Saratoga Racetrack for the match reception, they found out the area had been surrounded by the State Police Swat Team. Later back at the hotel, the television news had live pictures of protestors being loaded onto buses to go to the match.

When asked questions pertaining to whether the South African rugby team is racist, Bob reflects more on his 1978 tour to South Africa than his ’81 match experiences before his answer. In 1978 he played in 8 matches on an Eagle tour to South Africa. The color divide was evident and along 4 categories: white, non-white, colored, black. The South Africans he met lived in a protected world with few liberties. Bob recalls being at a party by a pool and all of a sudden two heavily armed military police jumped the wall. Someone had called in a complaint that marijuana was being smoked. When the military found this was not true and that the US Eagle rugby side was at the party, they sat around and talked rugby for a couple of hours. He remembers being in Orange Free State and thinking that in comparison with the Afrikaaners, the black population was small in stature. He pulls his thoughts and memories together and reflects on his own love of rugby. He has a thoughtful moment about the Afrikaans South African nation, where rugby is a religion, and the black South African nation where rugby is a game and a philosophy. He concludes that because of the physical stature and historical relationships to the game, South Africa’s international team will probably remain predominantly white for the foreseeable future.

The only match the touring side won on the tour was against an all black side. The ceremonial team tie Bob received after the match with the emblem of two hands extended out of the jungle holding a rugby ball remains his special tie of choice for a rugby occasion.