Jack “Big Daddy” Adams called for a ‘scrum down’ in Roanoke, VA ,on May 29, 2011.With the following slightly modified lyrics of a song many old Tulane players  belted  out decades ago,  “Gather yee drunkards give ear to my tale. I’ll tell you a story that will make you turn pale. About a fair maiden so young and so small,  she married a man….and had no father at all,” he challenged the teammates of Steve Davies to gather for Katie’s  wedding. This wedding was particularly special to so many former Tulane players because in 1989 when Katie was only 2 years old, Steve died of a heart attack.

Steve played for Tulane RFC from 1970-74 and was the 1973-74 captain. He played for NORFC in 1974-75. He was  a gifted athlete and an inspiring,  much loved, player who led quietly on and off the pitch. In 1992 when the Tulane Old Boys gathered for the 1992 reunion, Jack Adams (former Tulane club president and reunion organizer)  had the award the Old Boys  presented to a current player named in Steve’s honor. Chriss (Steve’s wife) and her new husband, Doug, were returning from their honeymoon and came to New Orleans  for the first presentation of the Davies Cup. Chriss and the award recipient fittingly chugged beer from the Davies Trophy Cup. In 2000 Chriss brought Katie who was then 13 to the Old Boys reunion.

In 1974 Tulane traveled to Nassau over Spring Break. The team played the following schedule on the tour:

“switch  game” – backs played in the scrum, and scrummies played back positions

Steve had the courage to invite the whole team to spend the night at his family’s home in Coral Gables before flying the next day to the Bahamas. Jim Richeson recalls playing 3 games in the Bahamas, as the team Tulane beat in the first game wanted a rematch on Sunday, April 14th . Tulane could only muster 14 players  to start the game and minutes before kick-off recruited a guy walking by who had never played rugby before.

In his challenge to attend, Adam’s magnificently explained the significance of rugby in so many of our lives and the goal of passing on to Katie the vitality that Steve brought to his life and those that knew him.

Jack Adams, “What did we love most about playing rugby? Where was our pride? It wasn’t how many games we won. It was the camaraderie, it was knowing someone always had your back, it was being with a group of crazy individuals that as a unit were unstoppable…never taking no for an answer, Always rising to the next occasion. Knowing strength in numbers and appreciating that sense of invincibility that we shared as a group of not just teammates but as friends.

I am the first to admit that the sense of purpose we shared, as bizarre and as decadent as it was is a cherished part of my life that has never departed or been forgotten. The reunions helped secure those memories and embelish the mundane to the phenomenal, as we all have a tendency to do, but we would be hard pressed to embellish the impact Steve had on each of us.

I will never forget Katie passing the trophy we created in Steve’s name to the Tulane RFC recipient in front of the Boot in 2000. Those moments are indeed priceless. A daughter whose memory of her father is dependent upon each one of us, a daughter who still remembers each of us from 2000 as her Dad’s friends–her fathers legacy.

We can laugh and joke that we are a sorry lot of mongrels that mothers should keep their daughters from rather than expose them to…but in all honesty ( I promise I won’t tell anyone) we are a fairly respectable lot. No, I would have never guessed it either but the fact remains that our past has influenced our success and we need to share that secret.

We need to show Katie that her Father’s past had a vitality that most only dream of… that it is possible to be free spirited, fun loving, and crazy, pushing the envelope everyday and still lead a life full of promise and success. I am sure you each taught that to your children and it’s not to late for us to teach that to Katie. She had a glimpse in 2000 but now is old enough to grasp the message.

So please join me, Jim and the handful of others that are planning to attend to make this moment special for a young bride wanting us to share our history of her father with her on the most special day of her life…not only is she getting married but she will be able to envision what her Dad’s life may have been like if he was still here to celebrate with her….and who can show her better how to celebrate than the Tulane Old Boys RFC. I hope to see ALL of you in Roanoke…..Big Daddy”

The following former Tulane RFC members were able to heed the call and attend the wedding of the daughter of a friend and teammate they had played with over 35 years ago:

Many more who were unable to attend contributed to a present for the bride and groom. 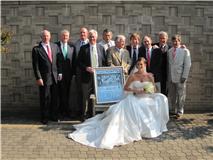 Jim Richeson wrote in with the following additions to the above article:  The reunion & picture on Steve’s bench and making a copy of the poster at his funeral was all my idea, although Jack made it clear that he was in from the beginning. I also asked Jack for a call to arms and he responded with the fine letter which you quoted, that I emailed to the group. I was Steve Davies’ best man and we were lucky that Southern RR transferred him to Wash., DC for about half of my dental school years at Georgetown and first several years of practice. Even when he got transferred to Roanoke, we managed to visit one another at least several times a year. I have known Katie all of her life and have been her touchstone for her dad all through the years.
Katie’s husband has a job in Chicago, where they moved last week after returning from their honeymoon on June 6th. Katie asked me several months ago how often I traveled to Chicago, and I told her was there 8 weekends last year, as the Amer Dental Assn headquarters are there, but was just elected Chair of my ADA Council for next year, so would likely be there 9-10 weekends next year. She then said well I hope I will be able to see you each and every time that you come to Chicago, and I assured her that we could do that.
Katie, her husband, and I have a meal scheduled together in July, another in August, and then again in Nov & Dec.
Since Jack preceded me by one year as Treasurer of the TU RFC and has always been the money handler for our reunions, I asked him to collect the donations for Katie’s gift and he kindly did so.
Again, the article is fine. Just wanted to fill in some details.
Best regards, Jim