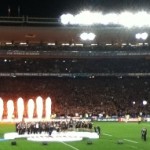 Below you will find various entries related to events that affected Deep South Rugby and members of the Deep South  RugbyCommunity during the 2011-12 season.

Sadly the season started with the passing of Tom Alderton on Sept. 24th in
Ft Walton. Tom had been the president of the Deep South Union in the 1990s and an integral part of Okaloosa Rugby holding many positions over the past couple of decades. He will be missed.

3. Cameron Falcon plays for USA U-20 that wins JWRT.

I’ll start with Event #7, as that was the one I was most directly involved with,.  At the finals in Auckland as the French faced the All Black haka,  I scanned down the press table and there sandwiched between the signs for ESPN and Sky Sport was
the placard displaying the location for “Mulletwrapper/DeepSouthRugby.net”.
Bucket list item checked off for this sports reporter.

Event #6: Billy Goddell called together an incredible number of regional over-50 rugby players that formed 3 complete sides and competed in the  French Quarter Fest Masters Tournie. Tulane Old Boys (circa 72-79) reunioned on the occasion and Pete Maud  – one of the founders of Tulane (1967) and NORFC (1973) was on hand to accept a  ball signed by many players who had had the fun of playing  for Tulane or NORFC with Peter way back when . (See article in 2011-12 archive)

Event  #5 was therearrangement of college divisions that took place this seasonr. Perrenial DeepSouth powerhouse LSU moved down from the College Premiere Div  to an SEC-type Conference within the DIV. 1AA umbrella. That is an oversimplification of what happened in college rugbyrealignments in this season, but to move ahead …  In Montgomery on April 14th LSU lost to Florida (35-17) in the SCRC (Southeastern Collegiate Rugby Conference)semi-final. Florida beats TN in the final 22-14. Alabama lost 31-22 in their semi-final vs TN  (34-12). In Sweet 16 Florida lost to FSU, but TN came back as at-large team to the tournie beat  Maryland (47-13) and FSU (45-27) to advance to the Final 4. San Diego State beats TN in semi (25-12) and then lost to Davenport (39-0) in the final.

In Div. 2 Sewanee and East Carolina came out of Dixie and South divisions in the Deep South Union region. Neither progressed to Final 4 – East Carolina losing to Salisbury 41-9 in Round of 8. Salisbury lost 51 -12 to Lindenwood in the National Championship. Lindenwood is in St Charles, Missouri, and has an enrollment including graduate students of about 17,000.

Story #4 NORFC Gold A team after  winning the Div. 2 National Championship the year before moved up to Div. 1. They had a fantastic season and advanced to the national round of 32  losing to Chicago Lions 34-12 in New Orleans on April 29th . Chicago had moved down this year from the Super League. In their next match they defeated the Boston Irish Wolfhounds (43-5) . On day 2 of Play-Offs Chicago lost to Palmer (19-15). Palmer lost to Glendale in the semi-finals  and Glendale lost to Belmont Shore (another team moved out of Super League) 34-11 in the Final.

Story #3 : Three new high school teams formed and played
competitively 15 aside in the LA high school league. The teams were  Mississippi ( an u-17 club side based on MS Gulf Coast), Lake Area High School (New Orleans-based public charter school) and Audubon  (an u-17 New Orleans based club side) . (See articles on LA High School Rugby in 2011-12 Archive.)

Cameron was the starting hooker in the USA’s defeat of Japan (37-33) to claim the championship. In pool play Cameron scored a try in the USA’s victory over Tonga.
Italy was the losing team in the next level of the IRB U-20 national tournaments (Junior World Championships) which was won by SouthAfrica in a 22-16 victory over New Zealand. Italy will now move down to the Junior World Trophy tournament and I have not yet seen a report on if the USA will be  moving up to the  Junior World Championship tournament.

Birmingham defeated Nashville on April `14th (30-18)  in a US Rugby South Quarter Final. They lost to Naples (35-5) in the South semi-final.  Naples went on to lose to Montauk (NY) in national play-offs in double overtime 26-21.  Montauk did not make it to Final Four. Rocky Gorge (Mid-Atlantic Union)  took the Div 2 title defeating Wisconsin 37-26.

In June, 2012, a  Louisiana Youth A ll-Star team participated in the 12th Rocky Mountain Rugby Challenge. The team defeated Nebraska 24-20 and lost to Heart of America 26-20 and Wisconsin 31-5 before losing to Southern California in the 5th-6th place play-off.

Ariel Hector (LSU & Baton Rouge WRC) and Emily Loudermilk (Clemson) were selected to play in Glendale, Colorado for the USA South All Star team in the National All Star Championship.

Brad Yandle (Ole Miss) and Brendan Smith (Birmingham) were selected from 52 players at South trial camp at Kennesaw State University for May 5th match against Bermuda national side. Bermuda was ranked 46th in IRB world rankings at the time of the match, Bermuda was using the match as a warm-up for 2015 world cup qualifier. That didn’t stop the USA South from handing the Bermuda National Team a 38-33 defeat. (See article in 2011-2012 for more accurate report on team selection and match.)

The following Deep South region players were selected to the USA Rugby South U-21 team that played the Cayman Islands on Jan. 2nd, 2012. Cayman Islands won 16-15.

Corey Fredericks (NOWRFC Half Moons) was selected to the USA Women Eagles squad that played in the Dubai 7s. The Eagles finished 4th overall defeating South Africa 22-10, China 14-7, and losing to England 31-0 in pool play. They lost to Canada 36-0, and Australia 22-0 on the second day of competition.

Liz Carrier (NOWRFC Half Moons) played for USA Rugby South select women’s side that finised 4th in the tournament with 5 wins and 2 losses.

If you would like to make a correction or addition, mail to DeepSouthRugby@hotmail.com.     This report was compiled by Tom “Croz” Crosby with input from many people.