NOLA Gold first ever to defeat LA at home 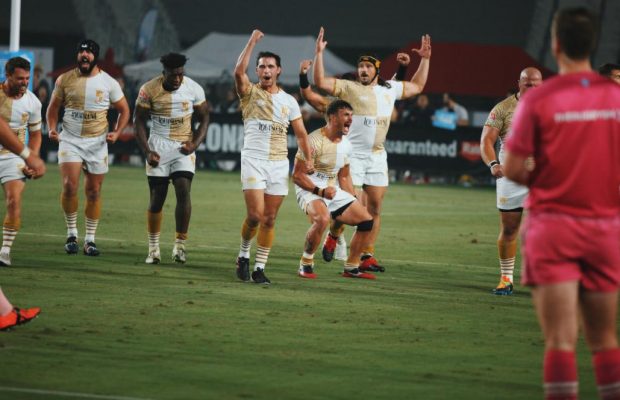 Playing at the historicLos Angeles Memorial Coliseum, the NOLA Gold recorded a historic win, defeating the LA Giltinis 21-20, in what commentator Dan Power called “the biggest upset, not of the year, but the history of Major League Rugby.” Down eleven regular players due to the international break and injuries, the Gold put together their most inspired performance of the season, leading to the most significant win in Gold history thus far. The Gold extended their winning streak to four games and delivered LA’s first-ever loss at home. With the Gold’s win and Rugby United New York’s loss to the New England Free Jacks on Saturday, the Gold claimed second place in the Eastern Conference and the last playoff position, with only two games remaining in the regular season!

With most of their starting lineup unavailable against the Giltinis, who led the league in points and point differential coming into the game, the Gold was facing their most formidable challenge of the season and arguably their history. The Gold began the match with their tenacious attitude on full display. While NOLA could not take the lead in the match’s opening minutes, their energy showed LA that they would not cruise to victory as they have most of the season.

After a missed penalty from Carl Meyer, the Giltinis moved the ball inches away from the Gold try zone. The Gold defense fought to keep LA’s vaunted offense at bay, but Dave Dennis eventually pushed the ball into the try zone in the 14th minute. Following Matt Giteau’s conversion, LA led 7-0. Less than 10 minutes after the Giltinis’ first try, they would get another one past the Gold. An overthrown lineout by the Gold flew right into the hands of LA’s Marco Fepulea’i, who burst through an unsuspecting Gold defense for the try (22’). After Giteau scored another conversion, the Giltinis led the Gold 14-0.

Hoping to get on the scoreboard before halftime, NOLA did their best to move the ball into LA’s territory. However, they would not have success until minutes before halftime. In the 39th minute, the Gold finally got the break they needed. After a Giltinis’ penalty, Carl Meyer sent his penalty kick right down the middle of the uprights. The Gold trimmed the lead to trail 14-3, entering halftime. By scoring right before halftime, the Gold changed the game’s momentum, giving the team from New Orleans the slightest opportunity to come out on top. This was all the Gold needed to complete the biggest upset in league history.

The Gold started the second half looking like a team inspired to stay in the playoff race. The Giltinis could not match the energy brought by the Gold. After a high tackle by LA, Meyer scored another perfect penalty for the Gold (52’), shrinking their deficit to 14-6. Only three minutes later, the Gold was again driving down the pitch. After the Gold broke into LA’s 22- meter line, it looked as if NOLA was creating a maul to push the ball forward. However, the Gold’s Joeli Tikoisuva caught the Giltinis’ defense off guard and took the ball, racing ahead untouched for the Gold’s first try (55’)! Meyer’s penalty cut LA’s lead down to one, 14-13.

Following Tikoisuva’s try, all the momentum had swung to the Gold. After their try, the Gold quickly gained possession back. Tikoisuva broke LA’s line and moved the ball past their 22-meter line. Following another LA penalty, Carl Meyer hit a short penalty kick, giving the Gold their first lead of the game (59’), 16-14, less than 20 minutes into the second half!

As expected, the Giltinis would not stop fighting to prevent their first home loss in the club’s history. Only one minute after the Gold took the lead, they quickly committed a penalty in their territory. Giteau calmly knocked through the penalty kick, giving the lead back to LA, 17-16, in the 60th minute. The Gold pushed as much as they could, but it looked as if their valiant effort would come up short. Victory looked even further out of reach when Kyle Rogers received a yellow card in the 70th minute for a late tackle, in what commentator Brian Hightower called “a horrible call.” Down to 14 men with only 10 minutes left, it looked as if NOLA’s chance for a historic upset was over. Commentator Dan Power perfectly described the feeling amongst the Gold after the call, saying it was very unfortunate that the players “fought so hard, just to have your season potentially taken away.”

When Serupepeli Vularika scored another penalty kick to extend LA’s lead to 20-16 in the 75th minute, the match looked all but settled. However, the men from NOLA perfectly encapsulated their city by never giving up in the face of sure defeat. The Gold won the ball back due to a LA knock-on and never looked back. With all the energy and will they had left, the Gold quickly moved the ball up the pitch, knowing only a try would be enough to snatch victory from the jaws of defeat. After being only inches away from the try zone, Hanno Dirksen received the toss and fought into the try zone to give NOLA the lead in the 78th minute! After the missed conversion, the Gold had to protect their 21-20 advantage with only two minutes remaining. In these final minutes, the Gold kept possession and finally kicked the ball out of play, completing the biggest upset in Major League Rugby history!

With eleven players out due to internationals or injury, the Gold still defeated the top team in the MLR, handing them their first-ever loss at the Los Angeles Memorial Coliseum, a historic feat. With this win, the Gold controls their playoff fate with only two games remaining in the regular season. If the Gold can extend their winning streak through the final two matches, they will clinch their first-ever Major League Rugby playoff appearance.

Following the historic win, Man of the Match Hanno Dirksen expressed pride in his team’s effort, saying that “even though many doubted us heading into this match, we always believed that we would leave LA with a victory. We executed our game plan well, allowing us to emerge victorious in a crucial game.” Head Coach Nate Osbourne echoed this sentiment saying [he was] “proud and excited for the team after such an important victory. Most importantly, we can’t let ourselves down after the win. Now, we are ready to move forward and onto Seattle”.

Their road trip continues July 11 as the Gold look to extend their winning streak to five games when they face the Seattle Seawolves at the Starfire Sports Complex. The game will take place on Sunday, July 11th, at 8 PM CT and nationally televised on Fox Sports 2. 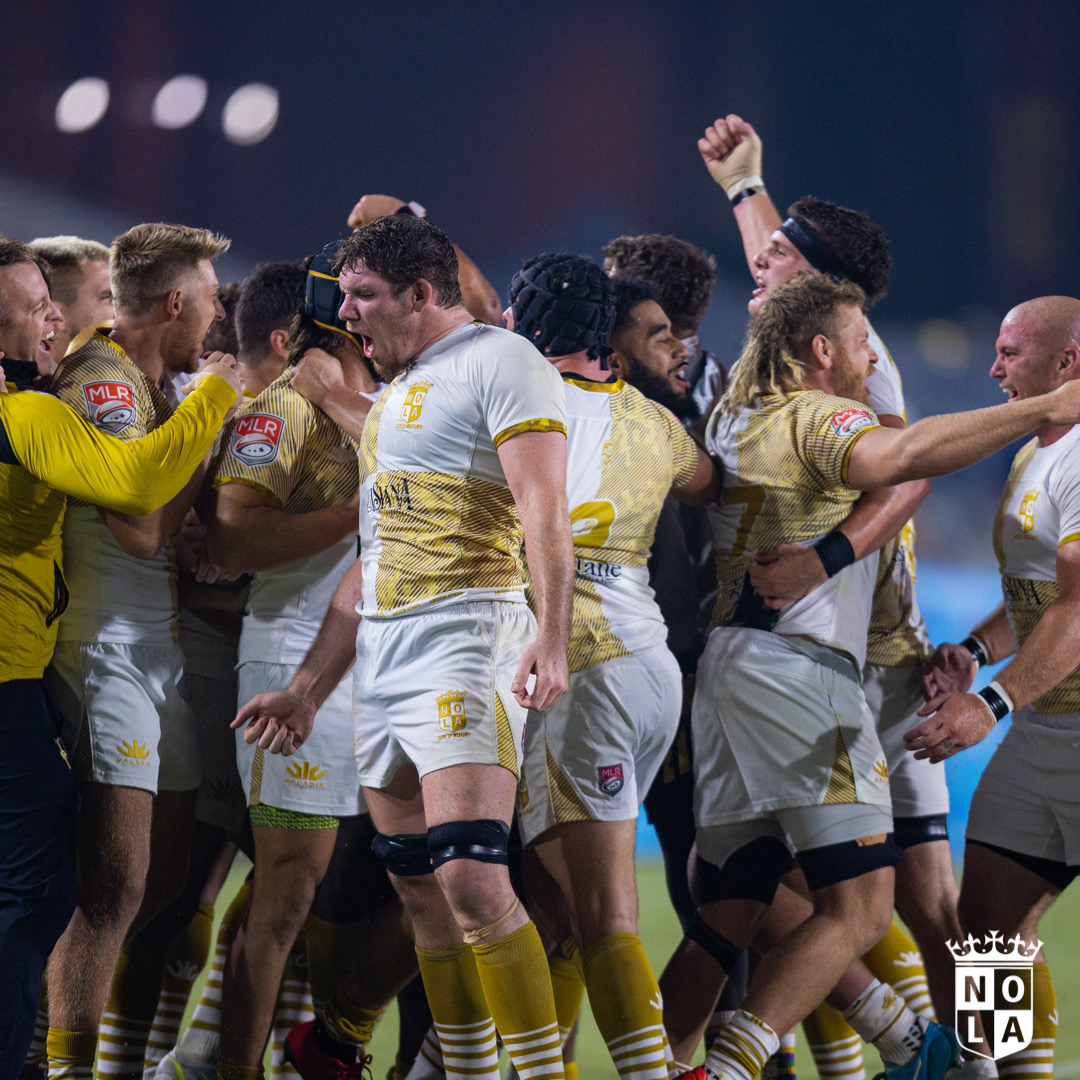 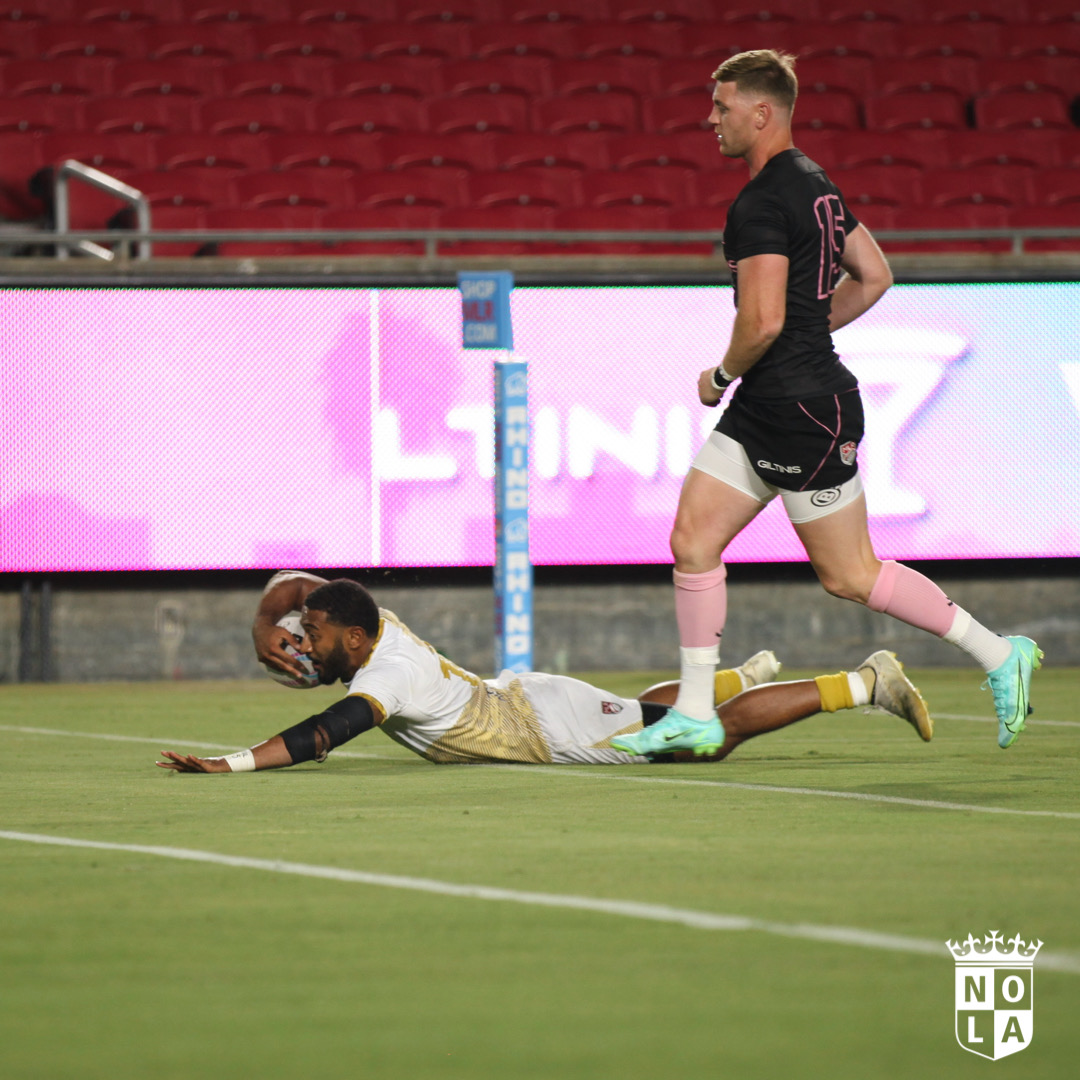 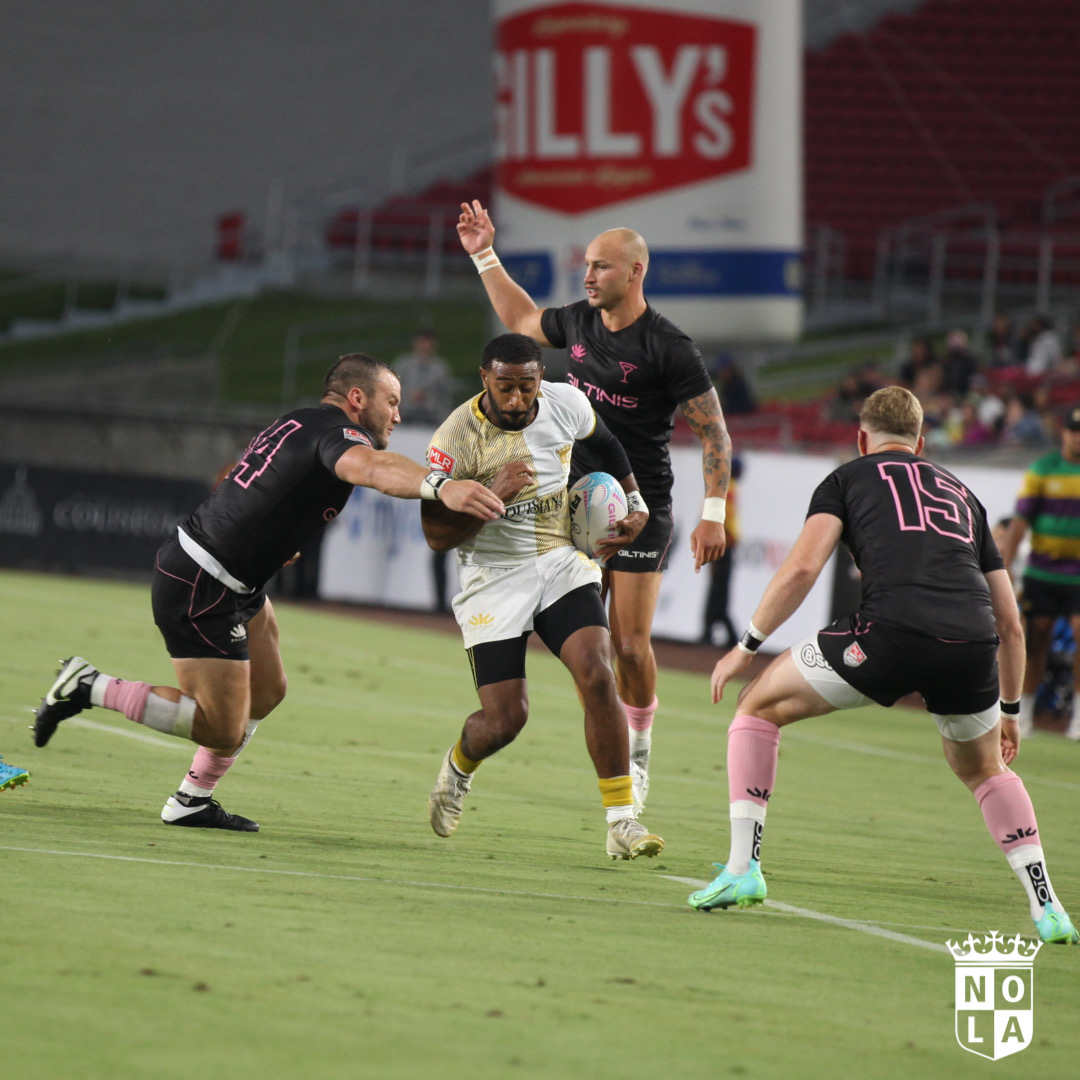 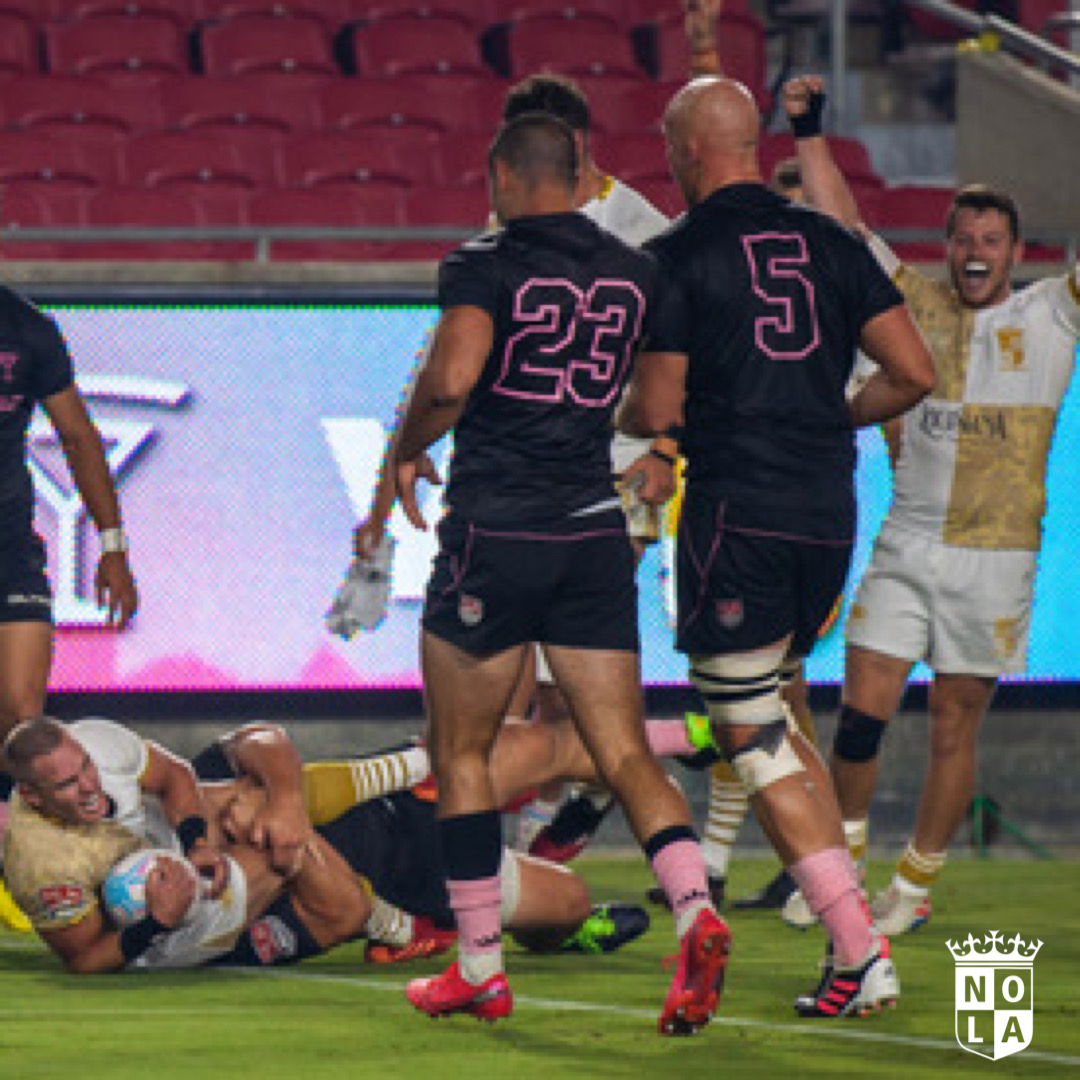 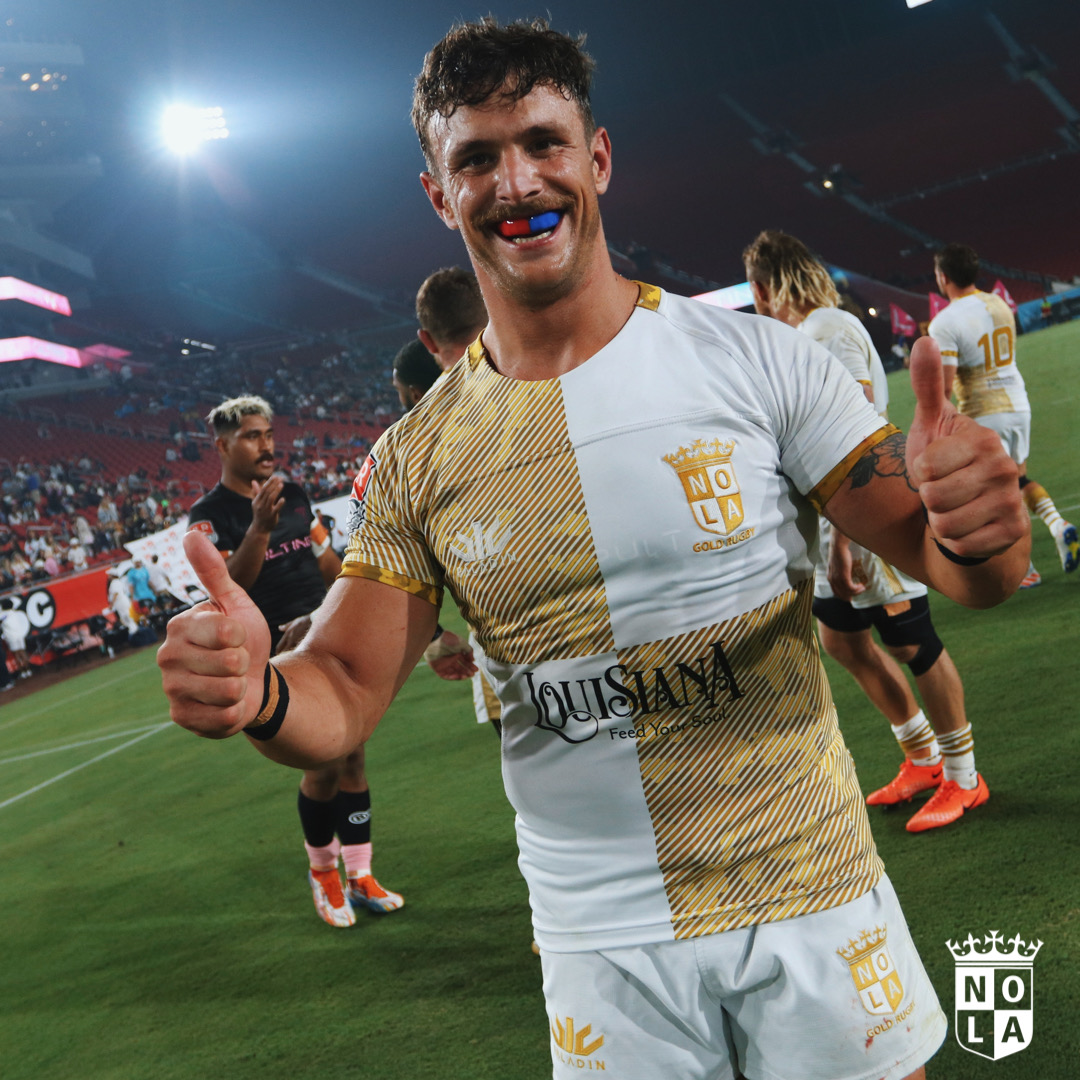