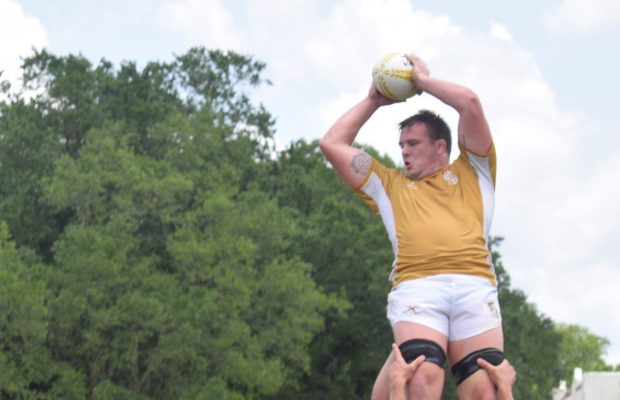 By Fran The Man Thompson
DeepSouthRugby.Net
There can only be one first ever.
In this case it was the NOLA Gold’s Major League Rugby home opener at a stadium built for the occasion on the campus of Shaw High School on the West Bank, which is also the home base of team owner Tim Falcon.
I met Tim running over me up on a pitch between the Mississippi River and the New Oleans Zoo in the spring of ’83. He competed in the trash can diving event with his LSU mates at the old NORFC clubhouse on Oak St. afterwards.
I didn’t take notes at this historic event, but New Orleans lost a close match played at a high level. I was impressed with the sight lines throughout the stadium, catching the first half from a tent behind the goal posts and the second 40 running the sidelines in the wide area in front of the grandstand.
Meeting Nick Federenko, one of the main characters in my favorite rugby story, was the highlight of my trip over from Gulf Shores. I was talking to Kirk from Kansas City, who not overly impressed with his own lone cap, pointed to the guys in front of us and said something like ‘these guys have a bunch of them.’’ A big dude immediately turned around and stuck his hand out.
“Nick Federenko” is what he said.
I was stunned. I told him he had to hear a story: “The Night The Chicago Lions Beat Up Steve Seville.’’ It happened at a tourney party in a hotel ballroom in Orlando, around ’80-’81. I was in the hotel room upstairs when Timmy McConnell burst in and told me about the beat-up. When I got downstairs, TR Rainey told me what actually happened. Seville walked up to Nick and asked him if he could look at his mug, Nick handed the mug to Steve, who proceeded to drain the beer and shatter the empty mug against his own noggin. Seville still has a huge scar across his forehead. I’ve told that story 100 times and I wasn’t even there. But I was often a couch guest when Seville, Duke and Bear lived under the Brooks Bridge in FWB (’82-’84). Seville is still part of Okaloosa RFC lore and the reason I know the name “Nick Federenko.’’
Kirk also knew my friend from the ’79 Ft. Lauderdale Knights, Monte McCormick. During the old Battle of New Orleans, Monte and half the South’s pack pushed my VW down Oak St. until I could pop start it. Big Red Causey from Baton Rouge RFC was one of three very large fellows squeezing into the back seat for that drive to the French Quarter.
I talked to Michael, the Seattle Seawolves owner, who told me that my Seattle/Tulane pal Shane did his team’s legal work as his give back to heaven’s game.
I hung with three knucklehead Coasties I already knew. They agreed that my mostly flight school Pensacola RFC teams were the class of the Deep South for most of the 1980’s. That’s how I remember the conversation anyway.
I spotted Bobby Johns’ mom, Jules, decked out in NOLA colors and a Bobby Johns pin. I shook Bobby’s hand in Aspen last fall to thank him for representing my old team so well in their tourney. It was a thrill to see mountains in the background and New Orleans printed on the scoreboard while watching spectacular rugby. Bobby suffered an injury in Colorado. He is fully recovered and playing professionally for his hometown team.
Bobby also played on a very talented New Orleans side at the Las Vegas 7’s a few years back while Mike Kerrigan stood beside me and filled me in on the team’s mostly homegrown talent. I met Kerrigan after Jazz Fest when Tim invited me to a post Jazz Fest party, maybe ’84. Kerrigan was a Crescent City guy and I was worried that one of the CC boys would sucker punch me. Tim said it would be fine. Times had changed since I moved to P-Cola.
That’s a full circle recap of both my experience at NOLA Gold’s first ever home game and my 40 years being around Deep South Rugby. I’m looking forward to going back with my rugby brothers from the Battleship Old Boys tomorrow.
Kirk, the Kansas City guy who introduced me to Nick Federenko, said he was dragged out of bed by friends to play his first match and was quickly hooked on our sport at about the same time I started playing. He said that he has no idea what his life would be like if those guys didn’t drag him to that game, but he knew it would have been different.
He didn’t have to say that he was glad that they did, and I just nodded.