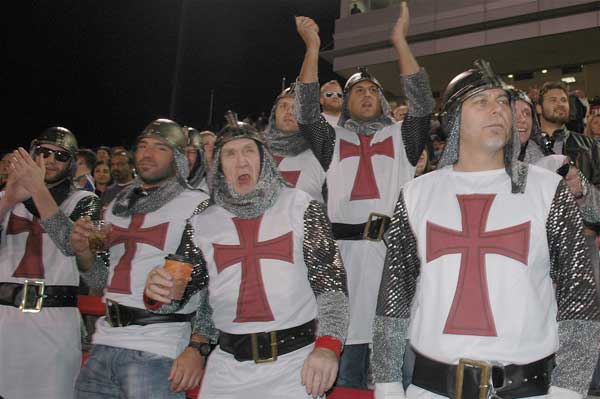 It is Day 1 of the London 7s. England Rugby lifted the ban on costumes (fancy dress) at the eleventh hour with an email to ticket holders last night. Their attempt to change the tournament from a giant party that rivals the Hong Kong 7s to a family friendly event is being met with a little skepticism. The main shift in approach seems to be introducing and promoting an international food experience. I don’t think that would have been something that would have enticed my kids to spend a day at the rugby grounds. Supposedly as a result of last year’s fatality, ticket sales have been limited to 35,000 for each day of the two day tournament. Twickenham holds 79,000. The hours of alcohol sales have been cut, also. It is definitely commendable that the RFU is foregoing considerable revenue for the sake of safety.

The English papers seem to be ignoring the tournament. Yesterday the one article I found about international 7s in the Daily Telegraph was about English scrumhalf Joe Simpson leaving 7s to try for an Olympic place, and he is not even picked for the English side playing in the tournament. Perusal of other papers found less or nothing. All the papers had articles on the semi-final match-ups for the Aviva Premiership semi-finals: Exeter vs Wasps and Saracens vs Leicester.

Yesterday in a leafy green suburb an hour south of London the USA Women Falcons played in a tournament with seven other international teams. With maybe a dozen spectators watching the main prize of the tournament was to impress coaches that you deserved an Olympic spot. The poorly advertised tournament was not easy to find. My source of information on location of the tournament was a brief chat in Spanish with someone on the Spanish women’s team who happened to land at Gatwick airport at the same time. I arrived at the Guildford Rugby Club just outside of Farncombe as teams were having lunch. Taking the opportunity to refresh myself with a pint of hand pulled London Pride, I wandered to the balcony that overlooked the pitch and struck up a conversation with someone on the English/Great Britain data analysis team. Her job was analyzing the data that they received from the GPS chips in the players’ jerseys. She was sworn to secrecy on the data, so I couldn’t pry info on Team Great Britain’s fastest player. I wondered if the order for secrecy had also extended to any information about the location of this tournament.