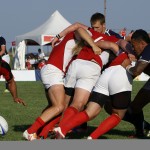 On Sunday afternoon the much awaited match of the tournament ended with Canada defeating USA 26-19 to claim the championship. Both teams romped through pool and quarterfinal matches. In semifinal matches USA won 33-7 over Mexico and Canada 31-0 over Jamaica. This tournament was the venue for qualification for the 2013 7s World Cup to be held in Moscow. Both USA and Canada qualify as the top 2 teams go through. Mexico defeated Jamaica 17-12 for 3rd place.

Canada women had a try fest through all their matches having little trouble with Trinidad and Tobago in the women’s final. The USA women were not present as they qualified for the 2013 7s World Cup by their performance in the 2009 7s World Cup.

The lesson of the tournament for the USA should be ‘size matters’. I received a premonition that this would be the lesson upon arrival at Ottawa airport. Passed from the initial immigration screening to secondary screening because of a 2010 DUI conviction, I was finally granted a 3 day pass to enter Canada and a warning to not try to return for ten years. The immigration officer was very pleasant but wrestled with bending Canadian law to let me in. At one point he said – and I paraphrase slightly, ‘If you were covering hockey or with ESPN or, even better, ESPN covering hockey this would be a slam dunk.’ (Sorry for mixed metaphor but being unfamiliar with hockey I’m not sure what the equivalent of a slam dunk would be.) The point being if I had been covering a bigger sport in terms of popularity or with a bigger media organization, he would have not had to keep me waiting for 3 hours while he struggled with setting me free on Canadian soil. Likewise the much smaller USA team struggled with gaining and maintaining Canadian soil. They were pushed in scrums like they were an unwieldy scrummage machine and blown off rucks like garden furniture in hurricane force winds.

The Eagles, although well coached, struggled to maintain composure as they faced their only real competition of the tournament. Luke Hume was a standout performer throughout the tournament despite his diminutive stature. Early in the Canadian match he collided with a teammate who was taken off the pitch for stitches after Luke bounced off him to evade a couple of Canadian tacklers and score the match’s first try. The toll of tackling much bigger Canadians eroded the USA’s previous confidence and strong aggressive defense and the Canadians’ physicality in defense was too much to overcome offensively.

During a 2011 Rugby World Cup press conference the Russian coach was asked why he had almost completely replaced the squad that had qualified for the tournament with other players. His answer was ‘because they were too small for World Cup rugby. Players need to be 100 kg or more to be competitive in international rugby.’ This is also rapidly becoming the requirement at the top levels of international sevens.