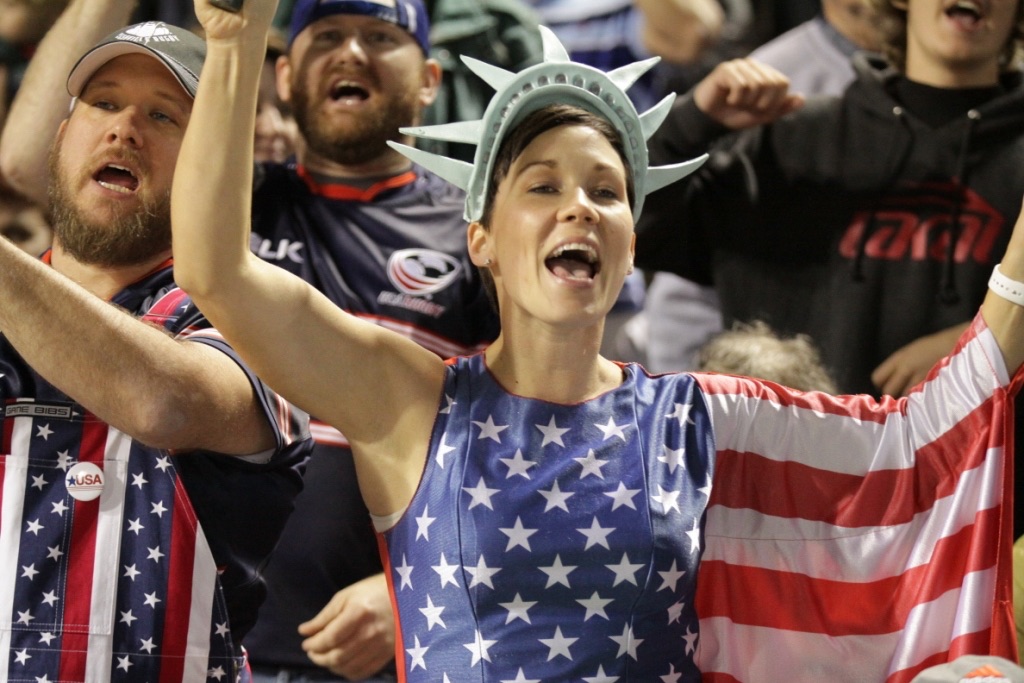 The Denver sun blared down on the pitch pushing temperatures well into the 90s. The ref stopped the match a few times for water breaks. In these conditions the USA Eagles (ranked 15th in the world) romped to a 62-13 victory over Russia (ranked 19th in the world) on Saturday, June 9th, 2018, while oddly never really seeming to dominate.

Russia’s defense was strong and well coached, but when it broke because of some real talent in the USA backline there was not good covering support. There is a lot of exciting potential in the back combinations USA Coach Gary Gold has to choose from. Paul Lasike hasn’t had close to his best match. It is almost mind-boggling to think how unstoppable a Dylan Audsley offload to a full speed Lasike would be. Marcel Brache had some brilliant breaks and seems to be running in slow motion as he pulls away from chasing defenders. Blaine Scully on the wing was as solid as ever, both in defense and as a finisher. Bryce Campbell had a good game in the centers and makes selection decisions tough. Nate Augsburger played well with no sign of a tendency to kick away good possession, but Shaun Davies, who started, would still be my scrum half of choice. Although there wasn’t much in it, I would give the winner of the USA fly-half competition to Maggie. I realize he went in when Russia was tired and already beaten. My preference is because I think he better pushed the above mentioned backline potential before kicking. Hooley did o.k. at fullback, but he wasn’t really pressured. It must be difficult when you know you’ll probably be replaced when Mike Te’O returns. Or maybe that could be liberating. A Maggie fly-half and MacGinty fullback combination would be interesting to watch before Te’O returns.

The pack still has problems. Although Russia didn’t push the Eagles like they have been shoved in recent times, the USA were called for at least one scrum collapse and next week’s opponents, Scotland, will be a much more skilled group of scrummagers. Taufete’e must have cemented his spot as hooker with his Russia performance if it was not already locked up. Manoa and Civetta are a formidable pair of locks. Dolan from #8 was always there and almost had a brace of tries. He played the whole match in the heat and at altitude. Early in the second half he miraculously avoided knocking-on a bouncing ball which Marcel Brache scooped-up and stepped in for a try.

Scotland next week will be a real test. Russia fell into this match probably because the match was being reserved for whomever won the European #1 qualification place for the 2019 World Cup. Russia in the past few weeks discovered they qualified because Belgium, Spain, and Romania had been disqualified for using ineligible players during qualifying matches. This is a great topic for another article as the ruling attempts to address the practice of “capturing” talent. This could result in the release of some players with South Pacific Island heritage to play for the island of their birth or birth of a parent or grandparent.

How does the USA look a little over a year out from the real World Cup, not the 7 a-side mini-world cup in San Francisco next month?
The Eagles are in the Pool of Death with England, France, Argentina, and Tonga. We play the teams in that order. Any realist with a reasonable knowledge of how the rugby world usually works knows that, yes – maybe once in every 20 years or so a country like Japan will beat a rugby power like South Africa, but lower ranked teams don’t beat much higher ranked teams. The USA is currently the lowest ranked team in the pool. Tonga is next lowest ranked at 13th in the world. That is our best hope to win a match at the 2019 World Cup in Japan. We play Tonga last. We’ll need our best players at their best in the last pool match.

For England (3rd in the world), France (8th), and Argentina (9th) whether they are one of the two teams in the pool to get through to the quarterfinals could depend on not just if they beat the USA, but by how much, so they will be looking to run up the score.

For Coach Gold the measure of his success will come down largely to the World Cup. His contract is worded so it extends through the World Cup. No truly knowledgeable USA rugby fan is expecting him to win it. It would be nice to knock-off a top-10 world power, but reasonably the best we can hope is that we beat Tonga, a nation of 110,000 people.

Now how to do this? Recently on social media there has been discussion of an article by a well-known sports journalist, whose name eludes me, about the USA being the sleeping giant in the rugby world because of the untapped talent of the NFL. This idea has surfaced many times over the past several decades. Of course, the talent in the NFL are not going to play rugby for what rugby players get paid. USA major league rugby teams have a salary cap total for all 30+ players on the squad at $350,000.

But, perhaps this is an opportunity to test the theory and possibly improve our chances against Tonga.

We could appeal to the NFL owners sense of patriotism.
Make America Great Again!! Beat Tonga!!

All our players stand for everybody’s national anthem.

Each NFL team makes a few players available to Coach Gold. He selects one from each team at the end of the MFL season in 2019. The NFL team then pays that player for a year at their contracted salary to play for USA Rugby.

When it is time to fly to Japan in September of 2019, he cuts the NFL recruits down to a squad of 16 that will start against England, Argentina, and France and the other 16 spots are from the usual rugby playing routes to what would be Coach Gold’s picks for his starting 15 +1 against Tonga. That makes the 32 player World Cup squad. Sixteen NFL players to see what they can do against 3 of the best rugby teams in the world that we weren’t going to beat anyway and then the Eagles starting 15+1 well rested and ready to face a battered Tonga at the end of their World Cup experience in the Pool of Death.