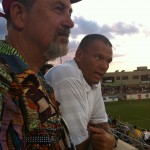 On a warm Colorado evening in a sold-out Infinity Park Stadium in Glendale (RugbyTown) USA the USA Eagles spluttered to a 27-7 loss to the Canadian national side. The sides appeared basically evenly matched except the Eagles were unable to finish when they made a break – knock-ons, failure to support, failure to take the right angle and finish with power, failure to off load in a timely manner and keep yourself in support, defense like last week Gave Up some relatively easy tries …. That is enough said about the dismal result. At www.deepsouth.net you can find an RSS feed that should have a few links to reports on the match. This story is about 3 sets of people and how this match brought them together.

The first set is me, Croz –  DeepSouthRugby.net’s  intrepid World Cup reporter , and 2 friends I worked with 15 year ago in Honduras, The Flanagans – Rick and Shelley. The Flanagans are soccer parents. They have 2 daughters who play soccer over 30 weekends a year. They live in Denver and had never been to a rugby match before. After dropping their daughters at home following a day in Boulder watching their girls play, they arrived at Infinity Park just in time for the national anthems. We found a place along the cement wall at midfield at the back of the south stands. Early sloppy play gave me and the announcer several opportunities to explain why scrums are formed and other aspects of the game. After about 15 minutes of play we decided to record the moment by taking a picture. We asked the fellow standing next to me if he would mind snapping a shot of us with the match and stadium in the background.

Enter the second set of characters in this story. Jason Hark, thrice capped US Eagle and current player in the super league for Old Puget Sound, kindly agreed to take the picture. Jason had played in the warm-up match between the US Classic Eagles and Classic Canadians. The “Classic” teams are made up of players who have played for their national team but are now 33 years old or older. The US won 14-10. Jason is from New Zealand, but moved to US in 1997 for school. He is a mountain of a man with Maori tattoos and a wealth of stories. Stories that ranged from bailing his brother out of jail in New Orleans during Mardi Gras to the price of a McDonald’s meal in New Zealand for himself and his nephews. His openness with people who just happened to be standing next to him and asked to have their picture taken caused a twinkle of interest in the nature of relations between rugby players in the Flanagans. When Jason left after the Canadian’s final try put the game out of any hope of an Eagle comeback, the second person in this set of characters  slid over to our side. We will call him “Jerry” – not his real name. Jerry had heard us talking about what an incredibly nice facility Infinity Park was and how incredible that it seemed to be purposely built as a rugby facility; although, whoever planned the concession outlets grossly underestimated rugby players adult beverage requirements during a match and the ensuing need for a well laid out plan for where the  kidney filtered adult beverages should be deposited. Jerry with the look about him of someone with information that could get him killed, challenged us to Google these three words, “cocaine, mathews, and dunafon.” Apparently if we did this, the secret illicit dealings that were the seeds that created Infinity Park would be revealed.  I haven’t Googled yet.

As we left the rugby castle that had just had a cloak of illicit dealings and mystery thrown over it, we went  to the Hilton Hotel for a farewell drink before I picked up my luggage and  a taxi to the airport. On the way we didn’t talk about the match, but about the characters at the match, the friendly teasing between Canadian and U.S.supporters, the way the teams shake hands after a match and will often have a meal and drinks together, and a stranger wanting to enliven our visit with rumors of illicit dealings behind the building of RugbyTown.  It is a culture very foreign to the soccer parent.

When we arrived at the hotel the bar was throbbing with post match good cheer. The crowd was mostly Eagle supporters, but everyone was in good cheer. We found a table which had a drink on it and soon were joined by the owner of the drink, Guy Hagen. Guy is the President of San Diego Youth Rugby. Guy  and the Flanagans compared the difference between post game attitudes of youth soccer players and parents and youth rugby players and parents.  The Flangans talked of teams indoctrinated in attitudes of  do not fraternize with your opponents, and Guy  talked of how a post match get together between teams was the norm. As we chatted a fellow joined us who Guy introduced as a friend and  former coach. As Rick explored aspects of this new-to-him rugby culture with Guy and his former coach, Shelley turned to me and said, “It is amazing how friendly everyone is.” I agreed and offered to have her pick-out anyone in the bar and we would go and say hello and I bet that within seconds we would be having an in-depth discussion of their life and experiences in rugby. She didn’t take me up on it, but had no doubts that I was telling the truth. Everyone was celebrating a game of rugby; even though, most of them had been supporters of the losing team.