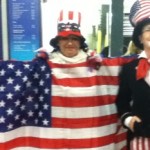 The last couple of days have brought a chill to World Cup excitement as last weekend’s red hot enthusiasm over the Irish upset of Australia has cooled a bit and underdogs perform as expected – valiantly losing. Samoa applied some heat to Wales in losing by a score of 17-10, but that was pretty much as expected. Some lingering warmth from the match spread through the IRB and media because of a Samoan player’s (centre Fuimaono-Sapolu) heated Tweeting about the IRB’s  unfair treatment of tier 2 nations by having them play with short turnaround times. Samoa played Wales on Sunday (9/18) four days after their 49-12 win over Namibia. One radio announcer called the Samoan Tweeter’s rant  stupid and the Samoan coaching staff stupider for not resting key players during the easy win over Namibia (49-12). Also on Sunday England had a late surge to defeat Georgia 41-10. Canada fell to France (46-19)  after a very competitive first half on the same Sunday. Tuesday Italy became a try scoring machine thrashing Russia 53-17. Wednesday saw Tonga pushing the Japanese Brave Blossoms around to end up winning 31 to 18.

Other warmish news from the sidelines this week were:

1. The All Blacks coaching staff trotted winger Zac Guildford out in front of the media for a bit of shaming because he got drunk in the team hotel following their loss to the Wallabies in the Tri-Nations decider a month ago. One must scratch their head over that one and assume there is something else going on behind the curtain. A 23 year old rugby player getting snockered after losing a rugby match would not usually cause a full out press conference to say the fellow has a drinking problem we are dealing with.

2. The French pick what many consider to be a B side to face the All Blacks on Saturday and the continuum of opinions on the impact of this on the All Blacks, ethics of the game, …

3. The legal troubles and amusing behaviors (filming the media that was filming him) of the security guard who released the security camera footage of Mike Tindall’s fun night out.

I won’t post this until tomorrow, and then won’t post again until I have plugged the campervan in at the Top 10 Travel Park in New Plymouth ahead of Wales v Namibia on Monday (9/26), so I am going to go ahead and give you the results of the next couple of matches. Tonight (Thursday 9/22)  Namibia will be the punching bag for the Springboks as they  tweak  the team they hope will take them through to the finals. Bryan Habana is one try away from the being the all time Springbok try scorer. That try will come tonight along with at least 2 more. Tomorrow a USA  Eagles B-side will suffer the injured wrath of the Wallabies. The USA could be in danger of falling into the record books as one of the top 10  all time team point records. In 10th place right now is Scotland over Ivory Coast in the 1995 World Cup 89-0. They might be saved if the Springboks score more than 89 points against Namibia, but in 9th place right now is Australia over Romania in the 2003 World Cup 90-8.

Last night as I was washing-up after our lamb chop and mint pea dinner in the travel park kitchen,  I listened to a group of Wallaby fans as they sipped Jamesons (I suppose trying to suck in a little luck of the Irish) and spoke about why top notch Australian rugby players aren’t coming through. The culprits were stupid selectors and rugby league. That very weird Australian rules football game the Aussies play didn’t take any of the blame. After washing up we walked into the village of Martinborough to watch Japan v Tonga. The pub at the Martinborough hotel was crowded so we crossed the street to a yuppieish bar-restaurant Cool Change where they had French champagne on offer for $5 a flute,  Bruce Springsteen on the music system, and a sedate dinner crowd mostly waiting for their table.  By second half the bar area had gotten a little rowdier. A Canadian had some kind of Kiwi whistle which he was trying to get Kiwis to show him how to blow. A Kiwi in rugby shorts and a deer hunter t-shirt (temperarture was in the low 40s) gave in a resounding blast and coached a few squeaks  from the whistle at the lips of the Canuck. This morning we woke to the sound of helicopters hovering over the vineyards that surround the travel park. Somehow this seems to be the area’s most economical way to keep the vines from freezing.

The rugby should heat up again on Sunday as Scotland and Argentina face off in their win-or-you’re-out match. Samoa will try to get past Fiji with at least four tries for a bonus point and healthy players for their match on Sept. 30th against the Springboks.  France will be trying to look like they’re trying to beat the All Blacks while trying to get a good measure of the tournament favorites with a view to once again spoil the All Blacks World Cup party in the Finals on Oct. 23rd.

Time to pack-up and head into Wellington. I’m meeting two old NORFC and Tulane rugby buddies (Dave “Vicious” Farrar and Bob Edmundson). There are some stories to tell, New Zealand wines to sample, and rugby to watch.