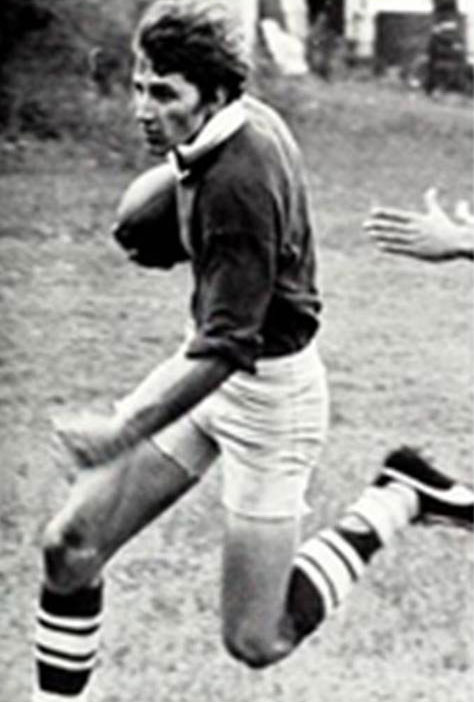 What makes someone a grandfather of an entity as large and with so many roots as Deep South Rugby? In the most common usage of the word it means a parent of parents. This might relate in rugby to a player who has inspired players who have gone on to inspire other players. If this definition is valid then Robert Markel is certainly a Deep South Rugby grandfather many times over. Robert was a founder of Spring Hill, Jackson, Xavier University, Jesuit, and various touch, under-19, and 7’s sides. The number of Deep South ruggers who began playing because those sides existed is difficult to calculate. Many of these ruggers have gone on to roles of leadership off and on pitches at clubs throughout the Deep South and other unions. There is a strong argument that Robert is a very prolific grandparent.

In the spring of 1968 at the age of 17 he played his first game as center with the New Orleans Blues against Southeastern Louisiana. The Blues had 3 games that season, all against Southeastern. In the fall Robert started university at Springhill College and soon had a team organized. In the spring of 1969 Springhill had its first matches against Tulane, New Orleans Blues (first victory), Pensacola, and Southeastern Louisiana. The following year Springhill played the University of Florida in their first rugby match. In the summer of 1974 Robert moved to Jackson where he saw a flyer put up by Frank Godwin asking if anyone was interested in starting a rugby side. Frank and Robert began running, passing the ball, and gathering players. Jackson’s first match was against Lamar College from Beaumont at the Hammond Mardi Gras Tournament in 1975. In the late 70s Robert moved to New Orleans and began many years involvement with the NORFC as a player and in various positions of leadership. Today he coaches Jesuit High School (which went to the high school national sweet 16 tournament in Utah in 2006), plays in the occasional Old Boys match, and is looking forward to a December trip to his favorite rugby tour destination – the Trinidad 7s tournament.

Probably before birth Robert and Diane’s sons, Justin and Gabriel, were exposed to rugby and from very early ages they were toddling around with rugby balls. At the age of 1 Justin was on rugby tour to the Cayman Islands. Youth touch rugby had its beginning in New Orleans with the birth of Justin and as Justin and Gabriel grew so did the successes of the sides. The New Orleans youth touch rugby side went to the Junior Olympic Rugby Tournament twice and when Gabriel was in 7th grade the side took second place at the tournament in Des Moines, Iowa. These touch sides evolved into the U-19 Smiley Faced Warriors. It must be mentioned at this point that Robert’s jersey design flair began to reach new heights with the Smiley Faced Warriors’ kits. The Smiley Faced Warriors played their first match against Catholic High in Baton Rouge in 1996. The Smiley Faced Warriors 70-0 victory over a prep school from White Plains, New York, is one of Robert’s many cherished coaching memories. He, also, fondly recalls playing alongside outstanding local back Jeff Reuther, who started out playing on a high school side coached by Robert and went on to play for the NORFC, Texas A&M, and Atlantis select side.

When asked about his favorite memories from 4 decades of rugby, the players and places and matches and moments just come tumbling out. His body remembers playing in the mud in Hammond or a match in New Orleans where the rain soaked pitch froze over and the ice crunched underneath his boots. His heart recalls singing “Rosin the Bow” with Richard Evans, prop for the NORFC in the 70s, at Spilfters & Smulchkins Ruggers Pub after a magnificent day of rugby on the batcher. In a tournament in Memphis in 1992 his 15 year-old son, Justin, played in his first adult match. Justin’s first try came on a pass from his father. Justin went on to be a collegiate all-American and to play for Atlantis. Robert’s neck and shoulders recall a match as prop for the NORFC in 1982 against John O’Connor, prop for an Irish side from Belfast, at the Freeport Bahamas Easter Tournament. His love of rugby recalls the birth of the concept of “Cosmic Buzz Saw Rugby” in Shreveport in the early 80’s. New Orleans drove up on Saturday to find a supposedly excellent Shreveport side impatient with the late arriving NORFC ruggers. Straight from cars to the pitch and the magic of playing in a match where all players are in tune, off-loads are quick and flawless, and movements seem to glide almost effortlessly to the eventual try still inspires Robert. The memories of the match flow in detail from the first tackle by Charlie Monnot that brought down 2 Shreveport players to the party that led to an overnight drive to Jackson and spending the night on the Jackson pitch – assuring arrival in plenty of time for the Sunday match.

Favorite match and tour memories, from the 800 or so matches Robert calculates he has played, are endless. He recalls scoring a hat trick for the NORFC in 1979 against an excellent Canadian team, Vancouver Rowing Club. He was playing center outside Ed Murray who went on to be rookie of the year for the Detroit Lions and the Super Bowl MVP award winner while playing for Dallas. He recollects beating a very good Oklahoma side while playing in the pack alongside Wayne Fontenelle and Al D’Elia and winning the Battleship Tournament in 1980. Recalling the 80s and 90s he warms with thoughts of summer 7s on Tuesdays and Thursdays, touch on Wednesdays, and the end of summer luau at his or Tracy Moen’s house. Stories of characters and matches and dinners with the numerous international players from South Africa, Australia, New Zealand, UK, and France (many of whom picked up traveling money working for Markel Lumber) afford an amazing window into the impact this ambassador of Deep South rugby has had.

In December, 1990, along with former NORFC teammates Fran Thompson and Tom Crosby, he made his first trip to the Trinidad 7s as a member of the Caracas Teachers RFC. That initial trip has led to 5 more trips to the tournament. Over the last 18 years he has played with many teams in this tournament. Favorite memories include 1998 when he played his first match with both sons and gave Gabriel a pass that put him over for his first try, in 1999 the NO Womens RFC finished 2nd and the men went out in the semi-final, and in 2000 at the age of 50 he played a total of 9 matches for NORFC 2nd side and the Barbados Defense RFC during the weekend of the tournament. Robert established such a strong link between himself and the Trinidad 7s organizers that following Katrina, Brian Stohlmeyer ( Trinidad 7s Organizer) contacted him to offer his family a place to stay in Trinidad. He is now planning his December return to Trinidad to renew old acquaintances and make new friends and memories.

In his 40 years of involvement with rugby in the Deep South Robert Markel has set a standard by which to measure what it means to be a grandfather of Deep South Rugby, and on October 23rd, 2007, the grandfather became a grandfather. His oldest daughter Bonnie gave birth to Eliza Rose Mead. One can certainly imagine that Robert dreams of the day when he gives Eliza the pass that puts her over for her first try in Trinidad.