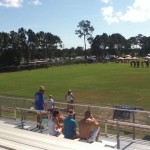 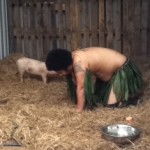 On Saturday, July 21st,  at the Ormond Beach Sports Complex five teams met in the men’s open division to decide what 2 teams would travel to San Francisco on Aug. 4th & 5th  to represent USA Rugby South Territorial Union at the 7s National Championship. Charlotte won the 5 team round robin part of the tournament beating the host team (Daytona Beach) 19-12 , Atlanta Old White 24-10, Jacksonville 59-0, and Miami Cabana Boys 25-14  – or thereabouts. Daytona beat Charlotte in a play-off 26-19 to win 1st place in the tournament.

I think  the biggest story of the tournament is the lack of participation. Why were there only 5 teams in the championship division, and not one team from Deep South , Palmetto, or Mid-South Unions participated? The tournament was advertsied as open to 16 teams in the championship division. Not one team from the Mid-South  clubs in Little Rock, Memphis, Knoxville, Huntsville, Nashville,  Chattanooga came. Not one team from the Palmetto Union clubs  located in Columbia, Greenville, Augusta, Charleston, Asheville came. From the teams in the Deep South  (New Orleans, Baton Rouge, Jackson, Mobile, Pensacola, Montgomery, Okaloosa, Panama City, Tallahassee and Birmingham) nobody bothered to come.  Sevens in the South started with the Kreb’s Brothers in Birmingham. There is some history and tradition here, for Pete’s sake!

This is a tournament that allows the top 2 teams to compete in a national championship. There is tremendous opportunity for everything from national recognition and glory and honor to at least a great party in San Francisco. Some of the better Florida teams (Naples, Boca Raton, Fort Lauderdale) didn’t bother organizing a team for the 4-5 hour drive and a day’s run about in Ormond Beach.

Why was it so unattended?

Is the cost in both time and money of going to the tournament too much? Does the time already committed to rugby during the 15’s season have people burned out? Are people from the South just not interested in going to  San Francisco?

DeepSouthRugby.net publisher (Fran “El Hombre” Thompson) proposed that most teams were afraid of a 59-0 spanking like Jacksonville received from Charlotte.

For future USA South championship tournaments every local area union should send at least one team. It could rotate through the clubs. For example in the Deep South Union once every ten years or so Panama City would have to send a team to the South Championships . You could go more often if you want, but when your time came your team had to go. If it is your turn to get a 59-0 thrashing,  then pull up your socks and make it look good for the 14 minutes of the match.

If you have an answer or an opinion on why this tournament was so unattended send it to deepsouthrugby@hotmail.com to be posted with this article.

Seeing how on September 1, 2012 there will only be two LAUs left from the South TU you might need to rethink your every LAU send a team approach.    Dube (President Deep South Union)

I can address some of the issues regarding 7’s participation. Ultimately, the 7’s season for the vast majority of our clubs is a social season. That explains why KNOX, MEM, NASH, were at Pitch-a-Tent 7’s with us (CHAT) last weekend. New Orleans ran the table again as they did last year, the turn around into a 7’s season is tough, both in terms of $$ and time. I have never seen a D3 team in these finals unless they were the host, so there’s a whole bunch of clubs gone. Old White, Daytona, and Charlotte are clubs that have a tradition of supporting 7’s (and Life at times) so they will always be there. The South went to a super qualifying system a few years ago because the previous format of regional qualifiers was losing attendance. Why make the usual attendees travel all over the South, clubs whose appearance in the finals is almost guaranteed. So hold a SQ, give the limited number of clubs interested a one off event and move on. As we move into the GU format, I anticipate that GU’s will hold their own competitions which may in fact revive interest. Until then, what you saw has been the norm for several years.   Peter L. Steyn

Kevin expressed his disappointment at the turnout both from teams and spectators.  The hope had been that with 7s becoming an Olympic Sport in 2016 that interest in 7s would be on a rapid increase, but this does not seem to be the case – at least in the South. Kevin feels that for the top players in the South the tournament and the South region in general is a dead end . The tournament in Ormond Beach and the national finals in San Francisco will provide little to no opportunity for recognition and selection to a national side. The probable players to represent the USA in national 7s competitions are already selected and being paid to train  in California. To crack into this elite group players need to move outside the South. Top youth rugby players have 2 options in the South for university, Arkansas State or Life; otherwise, they need to move to attend another Division 1A university (see link for Division 1A universities http://d1arugby.com/teams/ ) if they want a chance at national selection. Kevin theorized that many people do not come to watch 7s because of the reputation rugby has developed in years past for beer drinking, nudity, & pot smoking. Frustration was evident in Kevin’s voice as he spoke of the almost hopeless situation talented rugby players find themselves in the South if they want a chance at selection to a national team but also wish to stay in this part of the country.

I think there are a lot of things going on in the US right now that are really causing the Senior game to struggle.  New Orleans is the exception, but most of the Senior sides in the Deep South seem to be struggling with numbers and travel.  Guys taking multiple jobs, or being laid off and just quitting the game.  In the South in general we have always been somewhere that USA Rugby basically ignored from a National player pool standpoint.

Kevin’s frustration is easy to understand.  However, when typical Southern powerhouses like Life and Renegades aren’t sending teams it certainly causes one to raise and eyebrow.  The rugby landscape in the US is changing so fast at the moment I am not sure if anyone really knows what will happen next year and what the Olympics Sevens inclusion will mean for growth where 15’s is concerned?  CHeers and have a great weekend, Dube
Email from Brian Richardson (Daytona Beach RFC & the tournament director)
First I would like to say that Daytona won the South Championship beating Charlotte 26-19 in the play-offs. Charlotte did beat us in pool play 19-12 the first game of the day to make my life difficult.
History of South 7s Championship.  Attendance was poor because yes sevens is a social event.  There were 2 other social tournaments the weekend of the Championship and Beerfoot 7s the biggest social tournaement of the year is next week in Naples.  This year I had tried to attach the Social bracket to the tournament to gather a larger spectator base and expose the social teams to what is expected to move on to a national championship.  But without the other tournaments being blacked out teams chose different venues.  That is why I tried to set up a large interesting social after the tourney.
Talent and Coaching is one thing.  Teams not used to the procedure and expectations if you do win a South Championship are another.  First it will cost roughly $12000 to get a team of 12 and a coach to San Francisco on less than 2 weeks notice.  The state of rugby in the USA is cemented in 15’s, even though 7’s is the wave of the future.  There are just to many social tournaments, their value is nil, and they give nothing back to their Territories, or LAU’s, they are only fundraisers for their clubs.
Miami played Daytona down to the last second twice and once into overtime this summer and Jacksonville almost upset Miami earlier this summer.  But Neither team had been to an event where every game is the fight of your life.  Miami and Jacksonvilles performed well in their first two games and I hope they build from those points, and Miami almost beat OW in their 4th game, only to lose in the consolation for seeding 40-0.
Daytona Beach was always Division 3 for years until we almost knocked off Life and OW in 2004 and 2005 in the South Championship.  We lost in the final seconds to both teams just missing going to nationals in 2006.  We fortunately had the determination to stick with it, recruit, make ourselves better, and fundraise.  Getting to Nationals was another eye opening experience when your club starts playing teams that have USA national players on their roster.  Daytona also had multiple players from Tampa Krewe, Miami, Naples, and Orlando transfer over to us to play 7s in the summer, that is why you did not see some of those clubs in name.  So if you are not a real Division 1 powerhouse or Superleague these events are eye opening especially when teams sub in players that are better and faster than the starters.   There are no seperate Divisions in USA Club 7s like Division 1,2,3, and superleague.
But getting to club Nationals has gotten 7 of the players I have coached invited to Eagle Camps, and more have been considered.  Now the territories also have an allstar venue for players to get noticed.  But their selection process runs in direct competition with clubs trying to qualify for nationals,  Did you see the South Selector there, no.  As well trying to learn two different systems from two different coaches leads to players being good in neither system.  Only one Daytona Beach Player will be on the South Allstar team.  Then USA rugby changes their rules from time to time.  I missed a deadline to enter my 2nd side into the competition, and my waiver was denied.  So there are so many pitfalls, hurdles, etc.  That teams must navigate, and sometimes learn the expensive and hard way.
Now after all that try to tell the 6 wives and girlfriends attending with their significant others that are paying $1000 togo to San Fran, no Ladies they have to go to bed please do not disturb them.
Related Items
← Previous Story 2012 Law Changes
Next Story → Deep South Merges to Become True South & Related Issues