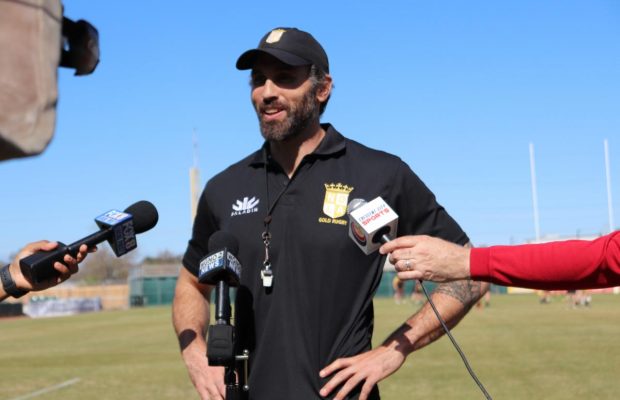 NOLA Gold head coach Kane Thompson has signed a two-year contract extension which will keep him at the club until 2024.
Thompson brought a competitive and workmanlike mentality to the Gold as a player and has carried those attributes into his first season as head coach.
“The Gold believes in Thompson. His passion and heart for this organization is why we are proud to have him fighting in our corner,” said General Manager Ryan Fitzgerald.
The 39-year old Thompson spent three seasons (2019-2021) as a player or player-coach for the Gold before taking over the head coaching position from Nate Osborne in 2022.
Before joining North American rugby, Thompson was a decorated international rugby player. He started every game in three World Cups for Samoa and was the starting eight-man when the Gallagher Chiefs won their first Super Rugby title in 2012.
Thompson has played a vital role in developing the Gold’s young players, including Matt Harmon, Andrew Guerra, and Tesimoni Tongauiha, who received their first cap for the USA Eagles under Thompson’s tutelage.
I’m grateful for the opportunity as head coach and look forward to reaching higher levels of success as we continue to build this program,” said Thompson.