DOUBLING THE IMPACT ON THE PITCH AT 60-YEARS-OLD 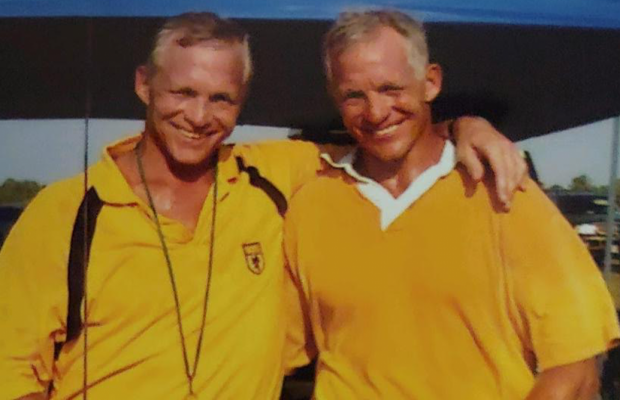 DOUBLING THE IMPACT ON THE PITCH AT 60-YEARS-OLD

Dale and Dean Wood, 60-Year-Old rugby twins, can still be found on the pitch today – not just for their love of the game but also to fill the high need of referees in the US.
By Ashley Brooks, USA Rugby

If you are looking for two individuals that have enough rugby stories to fill a bookshelf, look no further than Dale and Dean Wood from Alabama. This pair of rugby twins have been playing since they were 19 years old. As their 60th birthday approaches, this March, they can still be found where they have always been found – on the pitch reffing a match.
After being involved with other sports like Judo, the Wood brothers decided to try rugby for the first time in college in 1978. “We went in because there was a professor that said ‘anyone that plays rugby immediately gets an A,’” said Dale.
“So we showed up to practice, but we were very awkward. We didn’t play well because we didn’t understand the concept of the game yet,” Dean added.
“Eventually the coach came up to us and said ‘You’ll get the A, but you don’t have to come out anymore.’ We both responded NO immediately – because we were hooked. We spent the rest of summer practicing 5 hours a day so that we would come back as better athletes,” Dean explained.
As they continued to play and develop an understanding of the game, the two started to gain a reputation. “When Dean and I were both playing we often had other players come up to one of us and say, ‘Man, you are the best player out there – you are everywhere!’ Little did they know there were two of us!” Dale shared.
By their second semester, the brothers realized the demand for more referees. “There was so much turnover that there weren’t many referees out there. By this time, we were the senior players and knew more of the laws than anyone else. So it was natural for us to pick up refereeing,” said Dean.
“Basically, the game needed it. And that is what got us involved,” Dale added. This need for more referees in America continues today. Currently, there are over 2,150 certified referees in the US, yet teams continue to have a request for referees beyond what is available.
“When there are three or possibly five refs on the field, it helps to improve the quality of the match,” Dean said.
“As a referee, it is our job to ensure the game runs smoothly and efficiently. Having more referees makes that a possibility” Dale added.
Knowing that the need is immediate, the pair is often working to recruiting more people to get involved. “We hope to see more individuals become acclimated to becoming full-time referee’s early on versus being thrown into it because they know the laws,” Dale added.
Dale and Dean advocate that being a ref has many benefits associated with it, including keeping fit, staying connected to your buddies, remaining involved with the game and ultimately being part of the development of rugby in America. For them, becoming a referee was a life-altering decision. And like their mentor, Alex Sharland, who encouraged them to get involved, they encourage others to do the same.
Looking forward to their 70th birthday, Dale and Dean were asked what they hope the referee scene will look like. Dale answered, “In the next ten years, I want to see the same stage of development that we have seen in the last ten years.” His brother laughably added that on his 70th birthday, he hopes that their names are not included on the list of available referees but rather the list of spectators.
There is no shorter way to describe the Rugby Twins than as legends and stewards of the game. Like them, you can play an essential part in every match. Learn more about how you can help fill the immediate need and become a certified referee today.