NO. 1 NOLA CLASHES WITH NO. 2 SEAWOLVES ON THE ROAD 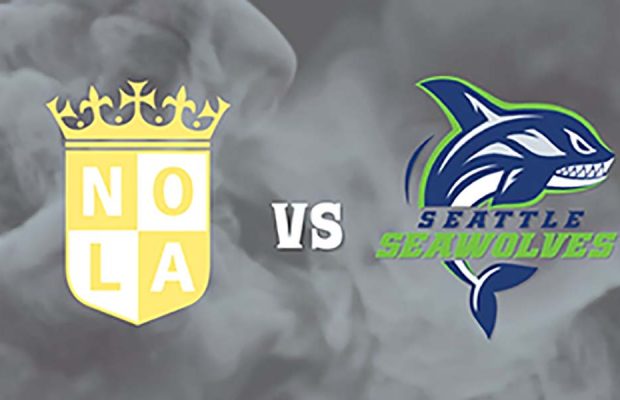 This highly-anticipated road test will be broadcast as CBS Sports Network’s Major League Rugby “Game of the Week,” airing at at 9:00 p.m. Central Time.

In Week three, the Gold claimed the 41-31 win over the Seawolves at home, as JP Eloff earned MLR Player of the Week honors for his performance – scoring 14 points, adding nine carries for 153 meters, two line breaks, four tackle breaks and nine kicks for 351 meters.

This rematch between pits Eloff against the MLR’s leading scorer, Brock Staller, who is fresh of his own Player of the Week performance, after scoring 22 points, carrying the ball nine times for 127 meters and adding a try in Seattle’s 52-10 win over Houston last week.

Seattle’s winger currently leads the MLR with 128 points, while the Gold’s fullback and vice-captain follows closely with 111 total points.

Eloff also leads the MLR with 35 kick conversions so far and holds the edge over Staller who has knocked through 29 conversions.

Despite this intriguing matchup, head coach Nate Osborne said this game will come down to whoever can win the middle of the field on Sunday.

“I’ve said that the last few weeks, but if we can be more physical through the middle than them and play with a fast ball, then I think we’ll have a good day. I think if they can slow us down, then it’s going to be a bit of a battle.”

The Gold also shifted a few pieces around ahead of Sunday’s matchup. Kyle Baillie is back in the lineup at lock, while Kane Thompson sits out of the matchup.

Taylor Howden moves back into the starting lineup at outside center, as Tristan Blewett pushes back out to the wing.

“I’m pretty excited to be around that cast there (in the back line) and I’m excited to go to Seattle and play in front of, I think it’s 7,000 people at the Starfire Sports Stadium, so that’ll be sort of an experience in and of itself. Last season out there it was a massive game, a huge crowd and they kind of did a number on us so, I’m pretty excited to get back out there and in the mix,” Howden said.

After having three of their last four games end with scoring margins of four points of less, (28-19 win over Utah, 35-31 win over Toronto, 34-33 loss at Glendale and 35-31 win over Austin) the Gold are looking to put together a full 80-minute performance against the Seawolves.

“We just want to get back to playing the way we want to play. I think the last couple weeks we’ve gone away from that,” Osborne said.

“As the year goes on and teams start to figure out what you’re doing, I think you try and go away from it a little bit. We just want to make them stop us this week. We want to play our game and if they can stop us, then we’ve got Plan B and Plan C as well, but we’re going in with Plan A and we’re going to punch them.”

Both Osborne and Howden also said they’re focusing on simplifying their game ahead of the matchup and preparing for a physical battle on defense.

“We just need to nail our little things – our one bullet, one kill clean outs, making sure we’re in the right spacing on defense, coming off the line together as a unit, having good communication and having small, little micro chat between our little mini units. So, I think if we just nail those little small things and just kind of keep it simple and get back to basics, I think we’ll come away with a pretty pleasing result,” Howden said.

Tune in at 9:00 p.m. Central Time on CBS Sports Network on Sunday to watch the action and follow along on twitter for scoring updates: @nolagoldrugby.