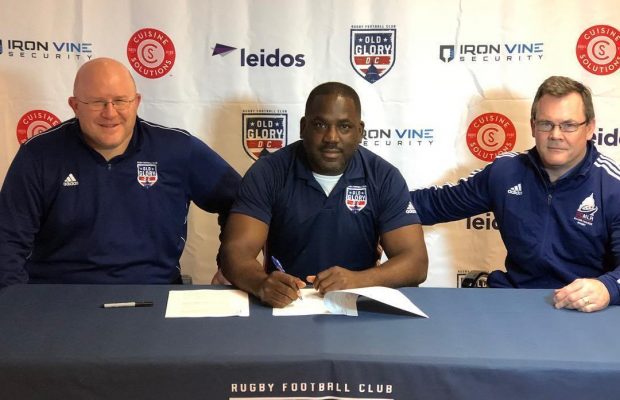 By DJCOILRUGBY
Old Glory DC signed Michael Fletcher, a former player with Mobile’s Battleship RFC to a contract in anticipation of joining Major League Rugby as an expansion team in 2020. He began playing rugby in 2005 with West Potomac RFC and currently plays with Washington Irish RFC. He was honored in 2016 as the Washington Irish team Most Valuable Player. He also has played for Old Bread RFC and Roots Rugby in addition to Battleship RFC. While on the Gulf Coast, he also played semi-pro football for the Gulf Coast Pirates and was selected to the All-Star team in 2004 and in 2007 as an outside linebacker. Michael will be joining the backrow as a flanker and Number 8 for Old Glory.

He has also played for the All-Navy Sevens team, as well as on the All Service team several times. Rugbytown 7s has been a tournament in which he has played numerous times and is a memorable won in competing for the Armed Forces Rugby Sevens Championship. Michael has played representative rugby for the Capital Rugby Union Selects against the USA Rugby South Panthers in 2017 and against NOLA Gold in 2018. He also played for Stars Rugby XV against the Capital Selects in 2017 amd also for Stars Rugby 7s.

Michael has served the DC Rugby community as a youth coach and through conducting rugby clinics. He also has coached Rogue Samurai Rugby, a representative team.

The 39-year-old back row is 6’0″ and 235 lbs. Michael is from Wilmington, Delaware and comes from a large family of nine siblings. He graduated from John Dickerson High School in 1999. He was a multi-sport athlete, playing football, wrestling, and track. Michael played semi-pro football for the Gulf Coast Pirates and was selected to the All-Star team in 2004 and in 2007 as an outside linebacker. Michael is a Navy Seabee and construction electrician in the DC area and spent 12 years on active duty in the Navy and 8 years in the reserves. This included deployments in Guam, Lithuania, Spain, Andros Bahamas, and Iraq. He will be retiring from the Navy in August, 2019.

“Nothing feels better than signing a guy I’ve known on the pitch myself – as a teammate, a fellow club member, and even sometimes as an opponent. I have the full confidence that he’s got the talent, the skills, and the character to deliver,” said Old Glory chairman Chris Dunlavey. “I expect to see Mike emerge as a leader as we pull together this team from so many different clubs and states.”