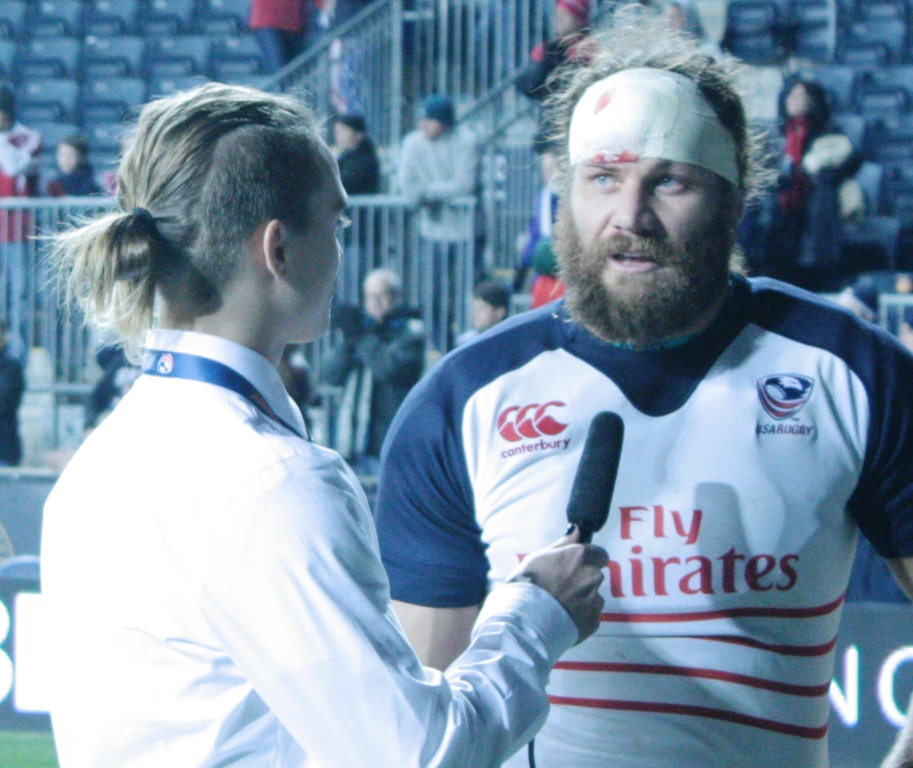 On July 19, 2015, the USA Rugby organization issued an online announcement that Todd Clever had “been released from the Eagles’ Pacific Nations Cup squad due to multiple squad conduct violations.” The Eagle’s coach, Mike Tolkin added the following, “Such behavior is contrary to the team culture that players and management have been fostering within the Eagles over time. Clearly, this is not a pleasant or desirable circumstance for either party.” Since then little has been said about this except rumors and opinions. Todd was excluded from the World Cup squad without a whisper.

Todd Clever was the face and heart of the USA national 15s side. If you ever watched a game regardless of how much you knew about rugby, you knew he was giving all he had. That was my English wife’s opinion. She watched Todd play a half dozen times. He had over 60 caps for the USA and most of these as captain. After matches he would spend time applauding the fans. I remember a World Cup qualifier in Charleston in 2013 when the USA was destroyed by Canada 27 to 9. USA fans were booing and yelling at Taku Ngwenya to use his fancy, bright colored shoes. After the match Todd circled the pitch, practically on his own, to shake hands and sign autographs when it was obvious he was devastated. A list of his awards would occupy paragraphs. He was the first American to play in the Super 14 in 2008, and when his 2015 World Cup dreams ended, he returned to professional rugby. He played a match for the world famous Barbarians select side in early September and then signed with Newcastle Falcons. He started for Newcastle at #8 in their opening match of the 2015-16 season.

Detractors who said Tolkin was justified because Clever was over the hill don’t know rugby. He was voted Most Valuable Player in the Pacific Premiere League in March of 2015, and as mentioned above, he is now starting for a top level professional English side. The USA back row was ineffective in the World Cup. Chris Wyles played a reasonable tournament, but he was not the lead from the front captain that Clever was. How did such a bad decision to exclude Clever from a spot on the USA side happen?

Because of the depth of his commitment to the team Todd remained silent through the USA’s World Cup campaign. He had several opportunities to tell this story since the July 19th announcement, but his support and devotion to the players and USA team was the driving motivation to remain quiet until now.

Below is Todd’s story in his words:

“The biggest thing is a feeling of betrayal by the USA Rugby organization. Whenever you change something significant like the captain or excluding a very experienced player right before the World Cup, you are sending a huge message. Everybody is on eggshells after that. It is important to get the right story out, and everything that was said was not true. I asked Nigel Melville (CEO of USA Rugby) several times to open an investigation. I never missed a team meeting. I never missed a team field session.

During the USA 2014 November tour to Europe, Tolkin was putting a stamp down that it was going to be my way or the highway. I had issues with what he was doing and how he was doing it. I always put my head on the chopping block for the guys. If I am stopping practice and saying we are done, it is for the boys. The team atmosphere, morale, and conditioning all come together on the field, and we were being treated like high schoolers. During the tour several issues developed about training, rules being made without discussions with senior player groups, and false accusations, but the second to last night of the tour at the jersey presentation before the Fiji match everything seemed to be going fine. We had beaten Georgia in Tbilisi and were feeling good about winning a test series on the road. We were about to head back to our rooms to individually prepare for the match when Tolks stands up with a piece of paper. On the paper is the list of numbers 1-26. He tells us to rate the 26 players on the team from best to worst and slide the paper under his door. I was livid and disgusted, and he knew it by my body language. This was not how we prepare. There were some guys I had just met when they came on tour two weeks before and some I had known for over ten years. I wasn’t going to do it. Several players asked me if I was doing it. I said I wasn’t, but if they wanted to do it, do it.

A couple weeks after the November tour, in our tour review, he questioned me about if I filled in the player rating. I told him I didn’t and that I thought the timing and everything made it ridiculous. It was the night before a huge test. He said, ‘If I tell you to do something, you do it.’ In the same conversation he told me he did not want me to be his captain moving forward. That was December, and I said, ‘If you think this is best for the team, then do it. I am on board with it.’ I didn’t need to be captain, but I wanted to be part of the team. I told him I would follow what he said and give it my all.

After that Tolks and I had a couple of conversations which made me a little suspicious that he might be gunning for me, but generally everything leading up to the World Cup seemed o.k. We spoke about my future rugby plans and if I was going to stay in Japan. I had offers in Japan. A few clubs in Europe and one in the southern hemisphere were interested. I told him that I knew my body. From where I was, I would be in the best shape for the World Cup if I was fresh rather than after having played a lot of games. Coming back to the USA and playing for OMBAC was the route I wanted to take to peak at the World Cup. He was on board with it. He knew what I was passing up to be ready for the World Cup.

In June I did the photo shoot for ESPN. It was USA Rugby that made the contacts that led to the photo shoot. On Friday, two days before our first team meeting, the magazine came out. ESPN and the ESPYs had contacted me about an invite to the awards party, and I told them I didn’t think I could make it because I would be in camp in San Jose with the team training for the Pacific Nations Cup.

At one of the first team meetings we got the week’s schedule, and Wednesday was a free day. Wednesday was the day of the ESPY awards. I went to Tolks and asked if I could attend the ESPY’s, and since Wednesday was a day off, it didn’t seem to conflict with any team activities. He said it was my day off. I had the schedule. I could do what I wanted, but I needed to be back for 9:30 am on Thursday. I checked flights and could be back at 7:30 am. It was pretty cool to have an opportunity to be part of the whole ESPN/ESPY thing, so I invited Scott LaValla, and we went.

On Wednesday the coaching staff decided to put in a 30 minute gym session for 6:30 – 7:00 am on Thursday. They sent the email out announcing the added gym session at something like 4 pm on Wednesday. By the time I got the email it was probably 11:30 or midnight. Scott and I knew we couldn’t make the early morning gym session, and there was nothing we could do about it. We felt hopeless. We had planned everything out to be back and do everything on the schedule, and now it was impossible.

We caught the morning flight, arrived at 7:30, had breakfast, and were at the 9:30 am meeting. We went to training … no problem. Trained well. Everything was good. After the session, they called us both in and they dropped me from the squad for that match. Scott was on the bench, and I was out of the 23.”

(If you listen to the tape, the emotion in Todd’s voice is palpable. It quivers as all it meant to him to be dropped from this match before a hometown crowd of family, former teachers, and friends flows out and his eyes water. )

At this point I thought it is only for the one match. Their reasoning was, like, this is a demerit. Scott was going to start and I was going to be on the bench, so now Scott’s on the bench, and I am off the team. In the room with Scott and me were Mike Tolkin and Dave Williams. After the meeting I asked Mike what should I say to media. Should I say it is a disciplinary matter? He just shrugged and gave me no direction. That is when I put up, “Awesome to be here. Sad I am not playing. I’m in time-out.” I didn’t know what else to say, so I decided to take it light heartedly.

Friday was the captain’s run and jersey presentation. I didn’t get a jersey. Then if you are not in the game 23 + 2 deep reserves, you have to go for drinks with the coaches. They will buy the drinks. There were 5 or 6 of us who were not playing. If you don’t drink beer, you have a Coke or whatever. Mike had beers. The other coaches had beers. I had beers, and that was the end of it. They planned a jog for the 6 guys not playing the next morning with Dave Williams

It was game day in my hometown. I had been cut from the team for questionable reasons. Then the people who did it require me to go out drinking with them and want me to go for a jog the next morning. I slept in. I went for a jog at the hotel and did my own warm-up. Then there was the game, and we supported the guys against Samoa.

The next day they called me in.
They said, ‘You missed another session.’
I said, ‘What? The morning jog?’
They said, ‘Yeah. You are going to be sent home.’

By the Australian and Harlequins warm-up matches I was fairly sure my World Cup dream was over. There were communications about still being on the call-up list, but you don’t want to be hoping somebody gets hurt.”

Todd has moved on. He hopes one day there is an investigation into how this came about. Mainly he would like an investigation so this sort of thing doesn’t happen to another player but also to clear his name.

Related Items
← Previous Story Even if ref didn’t blow it, Aussies had time left to beat The Scots
Next Story → 10-22-15 A Week to Wander & Wonder