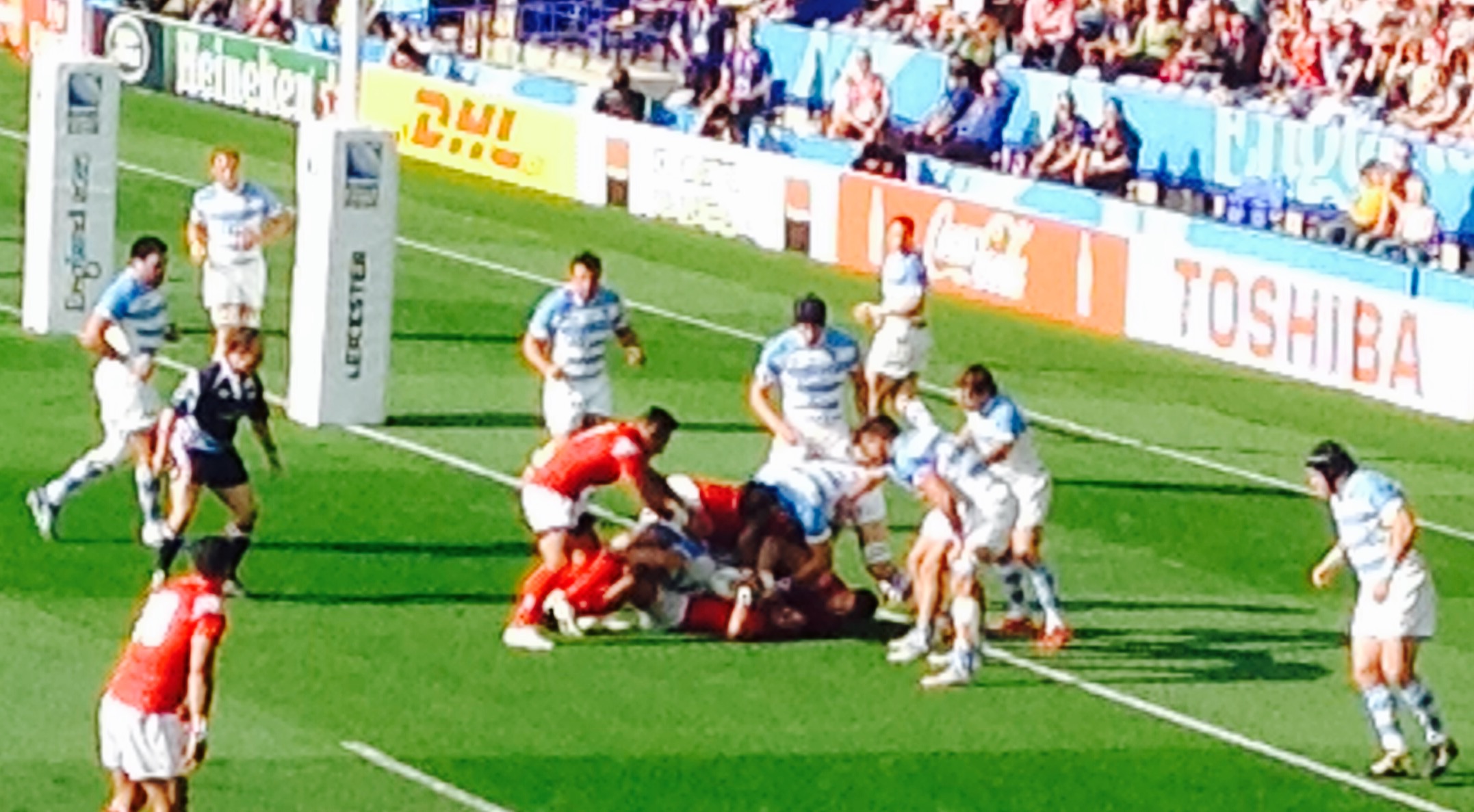 This time next week the pool matches will be over. Twelve teams will have already gone home or will be leaving soon. The very last pool match is USA vs Japan on October 11th and will have no impact on the quarterfinals unless Samoa surprises with an upset of Scotland the day before. Four teams will be going home winless. In all likelihood Uruguay, Namibia, USA, and either Canada or Romania will plaintively crawl home, the smallest of the minnows who dared to paddle in the deep end of the pool.

Tomorrow Canada and Romania struggle in Leicester to see who gets the Pool D Wooden Spoon. I am about 2 hours and $50 by train from there. A little skirmish is swirling inside me on to go or not to go. I was in Leicester yesterday for Argentina’s 45-16 lesson in composure to a Tongan side that is almost always fun to watch. The exception in my mind is a 2007 World Cup match in Montpelier where they protected a small lead against the USA for it seemed like 20 minutes by letting the ball lay in the back of a ruck. Fortunately referees began insisting teams use the ball they win. Yesterday they wore grass skirts in the stands and a fantastic early try put them up 5-0,  and I thought they could upset. I saw them beat France in 2011 and when the Tongan scrum magic starts and the offloads are connecting with strong soft hands they are near invincible. Although there were phases when a great Tongan side glimmered, Argentina’s quickness and self-assured poise were way too much.

Leicester was a lovely day out. The walk from the station to the Fanzone, where we were hoping to catch a shuttle, and then the walk to the stadium was close to 4 miles. I then walked around the stadium a lot. I went in one press accreditation entrance and the right entrance was on the other side of  a large protected area where the Tongan side was arriving. I walked around a large crowd of people to get into the media accreditation center to tell them I had bought a ticket. I should have just gone straight to the the Media Center. To cut the long story short I walked a lot and I think a trip to Leicester tomorrow will involve a lot of walking. The English weather is teetering on miserable, and the following day I leave for London and the USA’s penultimate World Cup match against 2 time World Cup champs South Africa and four days later  watch Wales titanic clash with Australia in Twickenham which will decide the winner of Pool A.  The winner will get Scotland and the loser South Africa in the Twickenham quarterfinals.

I think I will rest my foot except during all my hiking yesterday I was invited to request a press ticket for Canada v Romania. They took my details and said to email press operations, and they would send an invite, also.  I did this and got an automatic reply message that ticket allocations were finished. That is fair enough. I need to rest for the big match.

I was thinking about buying a ticket for Canada and Romania yesterday. A volunteer at the station said he thought I could do this at the ticket counter at the stadium. I went by the ticket counter several times in my wanders, but there were always long lines. I took a picture of the queue waiting to pick-up will-call tickets 15 minutes before the kick-off. Oddly they were all reasonably cheerful. The picture didn’t come out very well. I thought this picture of Tonga threatening was better. Does Argentina look offside to you?

Leicester was a delightful city. The bobbies had their photos taken with blue-striped Argentines and grass-skirted Tongans wearing their hats. Two bobbies walked behind us the 2 miles back to the station. I swear I was not under arrest. They chatted about how rugby crowds are much easier and fun than football (soccer) crowds. Anyway, if press operations call about the ticket, I will have to strap on my boots, break out the cane, and hop a train to Leicester to cheer on our North American neighbor’s avoidance of Pool D’s Woden Spoon.