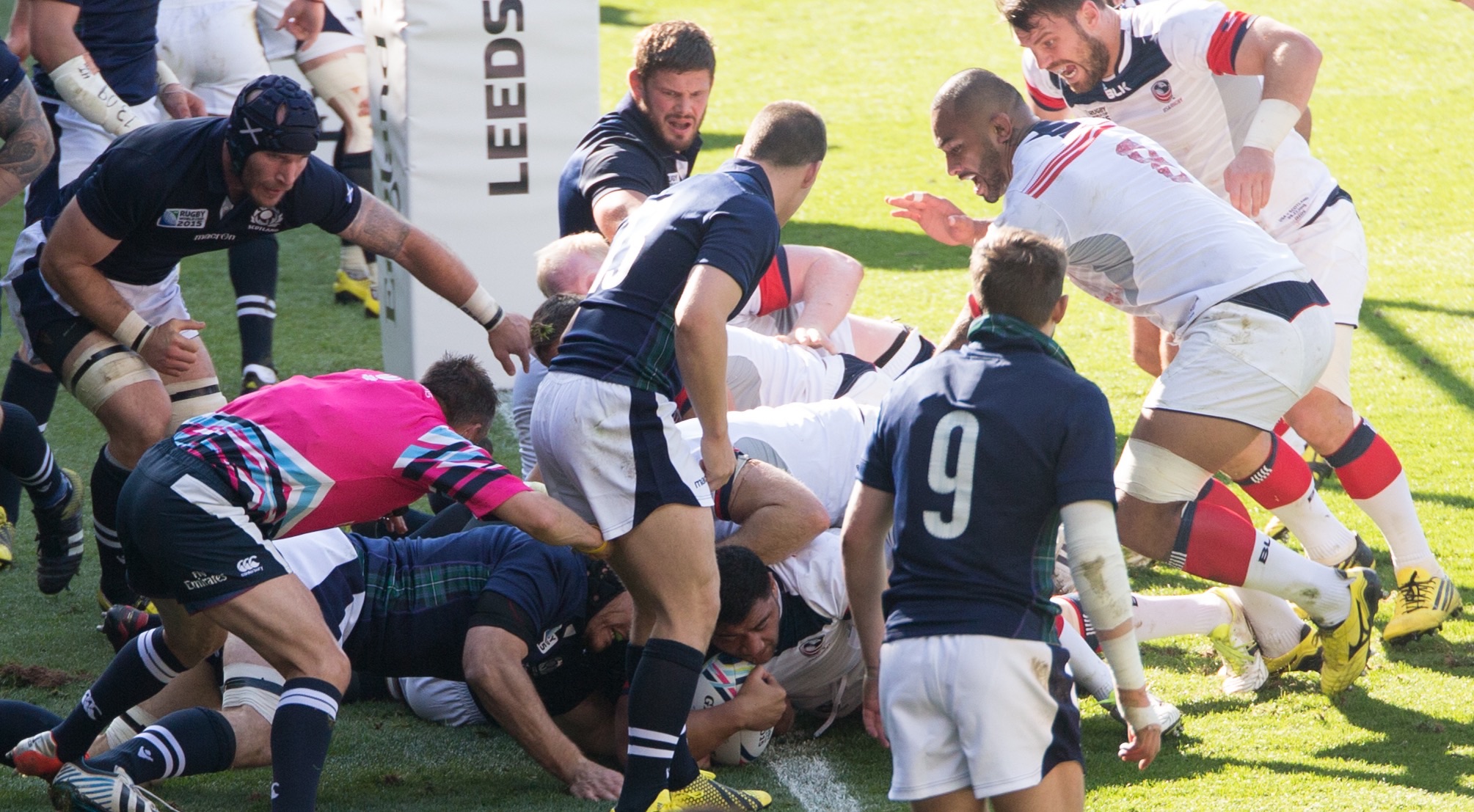 The second weekend of pool play lies behind a misty Yorkshire Monday morning. In Pool A, which has been called the Pool of Death, the Welsh Dragons have left England bleeding badly after their 28-25 victory. England’s only hope of survival is to slay the Australian Wallabies who set this World Cup’s scoring record yesterday with a 65-3 victory over Uruguay.

The USA’s hopes of another major upset in what would have turned Pool B into the “Pool of Chaos” began to disappear within two minutes of the second half kick-off. The Eagles’ astounding 13-6 half-time lead was cut to 13-11 when the Scotland simply took back kick-off ball and passed it to their wing, Tim Visser, who scored in the corner. Five minutes later Scotland was threatening from less than 20 yards out. The Scottish fly-half got quick ball from loose play, took a few steps to the outside, and passed inside to wing, Sean Maitland, who touched down close to the post. Where was the Eagle back row? Where is Todd Clever? Oh yeah … The score after the conversion was 18-13 and Scotland was well in control of the match. The Eagle fly-half, Alan MacGinty, closed the gap to 18-16 when Scotland was called for offside five minutes later, but the rest of the match was about Scotland getting 4 tries for a bonus Match point. They ended with 5 and a final score of 39-16.

The Eagles once again struggled with line-outs. As mentioned in an earlier post an Eagle coach assured DeepSouthRugby.net line-out problems from the Samoan match had been sorted. This is far from the case. The first two were not straight. The third knocked-on. The fourth was stolen. The fifth knocked down and recovered by Scotland. If this is sorted in the minds of the coaching staff, then maybe it is time to start throwing the ball straight to ground in the middle of the line-out and hope for a good bounce. Coach Tolkin’s post match press conference assessment rambled around words like momentum, leading, loss, and 4 day recovery. When asked if there were teams the Eagles considered unbeatable. He replied that the Eagles go into every match with the belief they can win. He plans to rest key players during the South African match, so they will be ready for the Japan match 4 days later on Oct. 11th, assumption being that it is more realistic to believe the USA can beat Japan.

South Africa’s 46-6 trouncing of Samoa has returned Springbok faith that they have a team that can win this pool and potentially the entire World Cup. Next weekend’s match against Scotland should be a decider of who tops Pool B. If South Africa wins, it will come down to bonus Match points unless Samoa pulls themselves together and upsets Scotland on Oct. 11th. Bonus Match points are achieved by scoring 4 or more tries in a match or losing by 7 or less points. If two teams are tied in Match points, the winner of the match in which the two tied teams played is ranked higher. If Scotland and South Africa draw and Scotland loses to Samoa, then all sorts of higher level maths (as they say here) come into play.

Pool C and D are becoming the Pools of Certainty. Argentina grabbed their bonus point in their 54-9 win over Georgia, and Ireland scored 6 tries in their 44-10 defeat of Romania. Argentina is on course to finish second in Pool C. Ireland’s order of finish will wait until their October 11th clash with France. The winner of this match will get Argentina in the quarterfinals . The loser will get New Zealand. Canada narrowly lost to Italy 23-18 which all but ensured the Maple Leafs will not automatically qualify for World Cup 2019 in Japan. The top three teams in each pool automatically qualify. Romania could play a spoiler, but this is one of the Pools of Certainty.