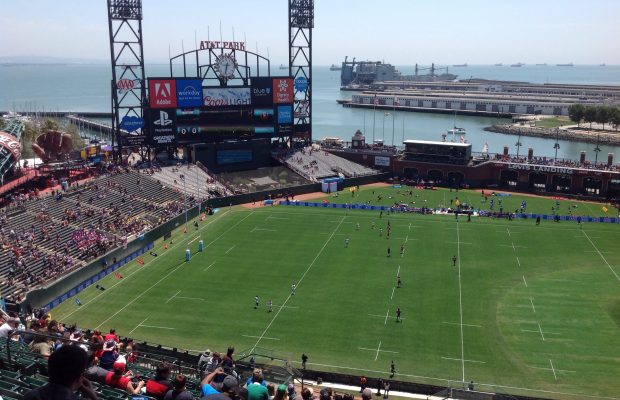 The US Men finished 6th. After defeating Wales easily in their first match on Friday night (35-0), they lost a close match to England in their only match on Saturday (24-19). England would go on to play New Zealand in the final. The Eagles had the talent to win the match against England, but failed to find a way to get the ball wide to their speed (Perry Baker). Inside backs, Iosefu and Unufe, repeatedly and destructively crashed into the strong English defense. With no apparent attempt to offload, they were brought to ground. Play slowed and Baker was very under utilized. On the final day they easily handled Scotland (28-0). In their last match they again returned to the disastrous strategy of crashing the defense and ended up with an embarrassing 33-7 loss to Argentina.

The US women cruised past China 38-7, easily handled Russia 33-17, and lost a close one to New Zealand in the semi-final 26-21. They lost to Olympic gold medal squad Australia 24-14 in the match for 3rd place.

The tournament is being touted as one of the great rugby events, and it certainly had its moments. The venue (AT&T Stadium – Home of the San Francisco Giants) was spectacular and the weather was lovely. Attendance was good all 3 days of the tournament and far exceeded turn-out for the last 7s World Cup in Moscow in 2013. It is reported to be the largest rugby crowd ever in USA. The 2014 USA match against New Zealand sold-out the 61,500 seat Soldier Field in Chicago, so no single day of the 7s World Cup was going to approach that as the AT&T Stadium capacity is around 42,000.

Fiji supporters dominated the crowd. When New Zealand knocked Fiji out in their semi-final match, a palpable enthusiasm evaporated from the blue haired, Fiji flag waving half of the stadium. USA supporters were quickly silenced in the 5th place match as Argentina jumped out to an early lead and never let up.

After the 2013 Sevens World Cup there were some doubts about if this tournament should continue. It doesn’t have the draw of the Olympics and in many ways is not that much different from tournaments on the HSBC Sevens Series.

The winners in this World Cup were mostly the same winners as the HSBC tournaments.

With the new knock-out format of the tournament Australia’s loss to France in the first round meant they would not finish above 9th. Surprisingly Ireland, who only joined the HSBC tournament this year for its last two stops in London and Paris, defeated Australia 24-14 to claim 9th place and the Challenge Cup trophy. They were perhaps inspired by their 15s brothers’ recent success on summer tour in Australia.

Fourteen countries bid to host the 2018 World Cup. The intent to bid on the next tournament has not happened yet. World Rugby while gushing over the success of this tournament is possibly now checking the bottom line before launching the next one. Plus the Olympics will now become the focus of a much wider interest in the sport of Rugby 7s.