On Friday morning  (Sept. 30) the New Zealand newspapers were reporting the ‘Real World Cup” was about to begin. Several teams faced do or die matches (Samoa v South Africa , Tonga v France, Ireland v Italy) and all  came up short. The quarterfinal matches are all as I predicted in my Sept. 19th article.

I was at the stadium in Wellington on Saturday (Oct. 1) when Tonga pulled off the upset of the tournament. The Tonga side played the most incredible match and defeated France 19-14. The stadium was electric with Tongalese flags and enthusiasm. On the last play of the match with time run out France had a penalty on the 5 meter line. Instead of taking a penalty kick which would give them 3 points and guarantee them the 19-12 finish they would need to get the bonus point for losing by 7 or less  that would make them second in their pool, France elected a scrum.  From the scrum they moved the ball wide to the winger Vincent Clerc who  scored the try. It was as if they said after 80 minutes of match play, “Tonga you deny us this try and you deserve  the quarterfinal place.” Tonga could not stop the French try and France goes on to face England in the October 8th quarterfinal in Auckland. Tonga’s supporters seemed oblivious to the quasi-irony of winning the match but being put out of the tournament  as they celebrated the historic victory well past the turning out of the lights in Wellington stadium. On Sunday as we tuned into sport radio Tongalese were calling the New Zealand station from Tonga to talk about how they were still celebrating the victory.

(Since writing and posting the above part of this article I have seen that France already had a one point lead over Tonga, so the only way Tonga could have advanced was to score 4 tries and beat France by more than 7 points. )

Samoa lost to South Africa 13-5 on Friday (Sept. 30) and the Samoan tweeting  center “Tweeted” his discontent with the ref and the IRB. Samoa will suffer not only the sadness of being treated badly by their schedule and some harsh calls from the ref, but now will face the wrath of the IRB which does not like to have its ‘wisdom’  publicly challenged.

Ireland royally thrashed Italy (36-6) to leave no doubt about their being the number one team in pool C. The injured Wallabies easily passed Russia but allowed a disturbing 22 points and 3 tries to the Russkies. Before the Australians the most points the Russians had scored were  17 against the Italians. The Russians should have played off against the Namibians and Romanians for the worst team in the tournament.

In the final weekend of pool play (Oct. 2) the All Blacks spluttered to a 79-15 win over Canada. The World Cup ending injury to Dan Carter during practice has raised fears in All Black fans that once again this side does not have all the pieces to make the dream come true. Coach Henry’s fiddling with team positions, injuries, and an incredible number of handling errors in the Canada match have fans sadly doubting they will carry the day on Oct. 23rd. Some irony here is that Wales (coached by Henry in the 1999 World Cup)  is coming on strong with a great 66-0 win over Fiji in their match today (Sunday, Oct. 2) and look to be the in form team to come through the northern hemisphere side of the quarter-semi final knockout matches  to meet the All Blacks in the final.

But the “real” World Cup starts on Oct. 8th. The probable quarterfinal matches have not changed since Ireland beat Australia on Sept. 17th.

Oct. 8: England vs France and Wales vs Ireland

Oct. 9: South Africa vs Australia and New Zealand vs Argentina 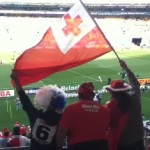