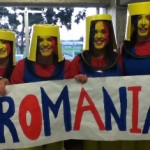 I’m just back from Romania’s final bow at the 2011 World Cup. They lost to Georgia 25-9. There was one try and the rest of the points were penalty kicks. In the first half there were no clean line breaks and  the teams made 69 tackles and missed 3. There were maybe a coupl of line breaks in the second half as Romania began to wear down, and Georgia’s large hard charging straight ahead running began to have effect leading to the one try.  It was not great rugby nor particularly exciting once Georgia began to pull ahead.In the second half I recorded play stoppage for a scrum or penalty every 2 minutes.

Romania received their farewell medals and had a half hearted final walk around the pitch. The Palmerston North Stadium has a wide track around the pitch and a cement barrier that further separated the stands from the players. It didn’t have the warmth of stadiums that allow for hand shaking and autograph signing as the team leaves, and not all the Romanian players even started the farewell walk. You could tell they were very disappointed at the loss. The captain blamed part of the team’s problem on the short (4 day) rest after their loss to England 67-3.

Yesterday (Sept. 27)  the USA Eagles and Japan had their final matches of the tournament and will be flying home before the weekend. Japan once again tied Canada. In the 2007 World Cup the  Japan vs Canada match was the only game to end in a draw and it looks highly likely that the two sides will once again have that to claim as part of their 2011 World Cup fame. Canada has a win against Tonga and has a chance to finish third in Pool A and automatically qualify for the 2015 World Cup in England.

I know saying a team played valiantly in a losing performance is like a high schooler saying something was “awesome”, but the USA was awesome and played valiantly in their 27-10 loss to Italy. The strategy of putting out a weaker side to face Australia paid off in terms of leaving the tournament with a great performance even if we didn’t get the win. Every bad thing I have ever written about Paul Emerick I take back. He was possessed and effective as was McDonald, Ngwenya, and Clever (as usual). McDonald gained the most World Cup caps (11)  of any Eagle with this match, surpassing the 10 World Cup caps of Alec Parker. The decision to replace Andrew Suniula (#12) and Petri (#9) could have come sooner. Petri too often kicked away good possession when the  Eagles were developing  forward momentum . Suniula was ineffective in defense and slow in offense. I watched the match in a Rosie O’Grady’s pub in Palmerston North as a poker tournament went on around the big screen tv. The crowd was soon into the match and solidly behind the USA. A couple of semi-inebriated Kiwis at the table where I was sitting started the match with some derogatory comments about the USA’s rugby shorts which they said resembled a French maid’s lingerie. After a couple of good tackles, solid defense, strong counter attacks, and harsh and unclear  treatment by the ref, they were in the Eagle camp and all thoughts of French lingerie were forgotten  –  at least until the end of the match. Clever and Emerick repeatedly won praise from the Kiwi viewers.

A couple of gripes about the reffing and then that is it. I will not write another thing about the refs. I have never reffed anything beyond a high school scrimmage, so I know I am not qualified. It is a tough job and I am glad there are those who want to do it and there are many who are very good. With all that preamble out the way here comes my gripes:

1) Scrums – The USA was destroyed by the Italian scrum. Fair enough, but a yellow card when Johnson picked up a ball on the side of a scrum which looked from one angle like it was out and then pulled back in was very harsh.  Also we keep getting these long scrimmages of 10 minutes or more with one reset after another. The props are complaining that the jerseys are so tight now that they can’t grab on anything to bind. If props aren’t presenting anything to bind on, shouldn’t the scrums be uncontested instead of randomly awarding penalties to the player the ref thinks he sees drop first? Rugby league has evolved to the uncontested scrum.  Maybe union needs to follow. I heard  one pundit on the radio say the game is for the players not the fans and that scrums are what the players like. The reports I’m hearing from the front row is that the scrums are not working and the fans are feeling cheated when over an eighth of a match is spent in resetting the same scrum. I disagree that the game is just for the players, but either way the scrums are not working.

2) Scotland lost by 1 point to Argentina. The extremely controversial English ref Wayne Barnes called the game. Paddy O’Brien(manager of the World Cup referees for the IRB) says, “My job is to be independent and make sure the referees are not the story.” I ask if what Paddy says is true how does a controversial ref  get a critical match in the same pool as his home nation?  If Scotland won and went on to beat England, that would force England into the quarterfinal with New Zealand. Doesn’t anyone involved with the referees see there is potential conflict?

3) My final gripe has to do with Argentinean journalist not standing for the national anthems. If you read my piece from the USA v Australia match you know what I’m talking about. Tonight when the Romanian anthem started there was a journalist next to me seated and working away on his various technology gadgets. I took out my I-Pod and snapped his picture. He looked up at me and grinned and then I think a little light came on. He put his gadgets down and stood up. I later  asked him where he was from and he said, “Argentina.” Somebody in Argentina tell your journalists to stand for the national anthems.

Friday Russia will end their first World Cup winless. The Eagles having thwarted their dream  of coming away with a victory at their first tournament. Canada, Fiji, Georgia, Tonga, and most likely Samoa, Scotland,  and Italy will conclude their 2011 World Cup this coming weekend.  With no real upsets (Ireland beating Austalia both being  top tier 1 teams) the questions of how to narrow the gap between the top teams and the next level swirl around the wakes of the departing teams. Unfortunately the answers are complicated and the will to enact laws that prohibit poaching or blocking  Pacific Islanders from playing with their nation of birth is non-existent in the IRB. In a year  the qualifying for thenext World Cup  will begin and the questions will be lost amid money tossed at qualifying events until they arise again in September in 2015.