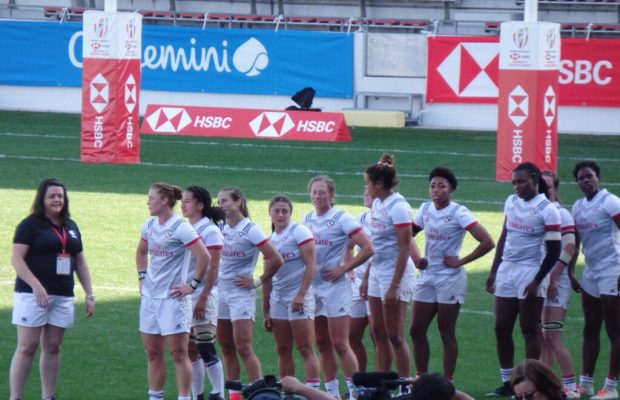 By all accounts and my own personal experience, Coach Walker is a very nice guy. Sadly the old adage about nice guys seems to be playing out with the USA Women’s 7s team. After crashing out of the cup play-offs on Day1 of Kitakyushu 7s the Eagles defeated the hapless Japanese women before their final match of the tournament against Ireland for the Challenge Cup (9th place). Tied after the end of regular play, the Eagles scored first in sudden death to claim the dubious honor of taking home the hardware for being the best of the 4 worst teams.

I’m not going to sugar coat this. Since their 3rd place finish in 2013 World Cup the USA Women have slowly spiraled to their current low ranking while Australia, France, Fiji, Russia, Spain, and now Ireland and China have continued to improve. After the 2013 World Cup with the pressure to bring home some Olympic hardware, then Coach Suggitt (sadly now passed, RIP) rather ruthlessly cut team stars like Vanesha McGhee, Kimber Rozier, Natalie Marchino, and Devin Owsiany to bring in better athletes like Alev Kelter and Jessica Javelet. That seems to have been his undoing. As new dynamics formed on the squad, a rumored player revolt forced him out and a similar fate soon awaited his replacement, Julie McCoy. Coach Walker took over a few months before the Olympics and was thus not held responsible for the team’s poor Olympic performance.

After over 2 years at the helm and with a World Cup less than 3 months away, is there a light at the end of this tunnel of disappointment? After Japan the USA women return to the Olympic training camp in San Diego to prepare for the next HSBC 7s series tournament in Canada. Aren’t there some almost-made-the-Olympic’s squad of hurdlers or sprinters who can bring the world class athletes necessary to be competitive against teams like New Zealand and Australia? Where is the female equivalent of a Carlin Isles? Australia brought a handful of U-20s to Japan to begin the process of preparing to defend Olympic gold; whereas, the Eagles kindly gave an aging Kelly Griffin (now approaching 32) a run around.

The HSBC Women’s 7s Series continues to struggle to find venues that will have crowd support. In Houston in 2012 I spoke with a then IRB representative who said they were committed to Houston. The next year the tournament was in Atlanta and soon the North American stop would move to a small (1,600 seat) stadium in Canada. The Men’s series attracts crowds because of the excitement of play by most of the teams in the series. The Women’s series flounders around the world in part because most of the matches are beset with knock-ons, sloppy defense, and slow offense. Why are the New Zealand Black Ferns so popular? They are the exception. Australia uses the tournaments to groom new players. They strategically save their experienced talent for the competitive matches in the play-offs. If these tournaments are to survive, the matches have to get better. If Coach Walker is to survive the Eagles have to get better.

In my post-match interview with an outstanding player on the USA squad, Alev Kelter gave the usual answers about taking one tournament at a time and after this season ends in Paris going back to San Diego to prepare for the World Cup in July. Her hope was that somewhere along the way they would find “the magic”. If somehow she could look inside and spread the talent, speed, work rate, commitment and skill that she displays throughout the team, the Eagles would be on their way back up the rankings. But that is the coach’s job and will require some hard and sometimes seemingly ruthless decisions, and those decisions need to be respected by the players and supported by USA Rugby administration.
Apologies to Kelly Griffin who I have admired for years for her talent, work rate, and commitment. My point is there are hard choices to be made. As a retired educator self-funding my rugby journalist hobby, the women’s 7s is now a road too far for an experience too mundane.