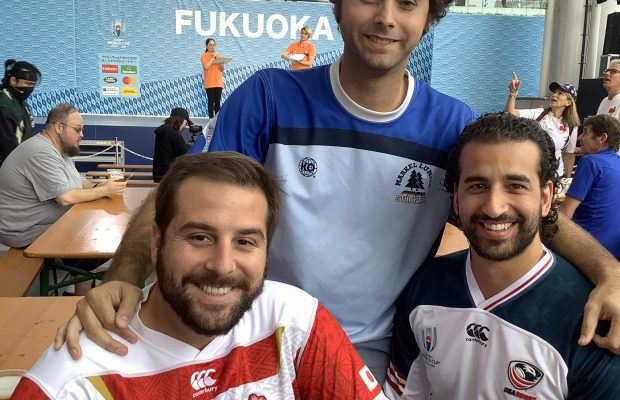 Typhoon Mitag crept toward Fukuoka with the promise of bringing heavy rain and the possibility of the USA’s greatest World Cup success – a draw with France. Tournament organizers were holding that out as the main option for a cancelled match. In the end Mitag moved west and a light shower didn’t stop the match or the French from gaining the win and a bonus point for more than four tries in their 33-9 defeat of the Eagles.

Match reports will describe the USA’s failure to move the French over the try line in two early mauls from line outs five meters out. The USA then took three points whenever the French made kickable mistakes. The French were not at their best, but in the last fifteen minutes they were more than enough for the Eagles, and they put the match out of reach of a bonus point for losing by seven points or less.

Signs of the World Cup’s presence in the area were plentiful around the Hakata/Fukuoka  train station, but elsewhere in the area they were scarce. The Fanzone was by the Hakata station. It was not a big area and signs warned that even if you were waiting in line, you might not get in. I had filled in a survey for a Japanese fellow earlier. It was a complex research project asking me to breakdown why I was in Japan and what I hoped to see and do, how many yen I was planning to spend on my trip in various categories and then further break that down by how much would be spent in the Fukuoka area. It wanted to know what I planned to do in Fukuoka and did I think I would come back. The surveyor’s smile held, but his eyes drooped as I truthfully responded I was there for the Rugby World Cup and would not be coming back.

With some time to kill, I got in line for the opening of the Fanzone. Hoping to get a souvenir cap or t-shirt, I quickly circled the booths to find where they were selling merchandise. There were  booths selling American whiskey, French wines, passing out advertisement leaflets, but none selling World Cup merchandise. I bought a Heineken and sat down to wait for the Ninja show. The announcer came on the stage to warm the crowd up. On the big screen came the World Cup logo with France on one side and their flag and the USA on the other with the flag of Argentina. She then encouraged the French to cheer their support for their team, and then for the USA to cheer support for the USA and indirectly Argentina, I suppose.

At the table behind me a group of USA supporters were having a beer. One was wearing a Markel Studwear jersey. Robert Markel, the designer of the jersey and the “grandfather of Deep South rugby”, had started teams at Springhill and Jackson and youth rugby in New Orleans. He was an early teammate of mine on the New Orleans Rugby Club and a long time friend. I asked if they were from New Orleans.

They answered that they were. We introduced ourselves and it clicked. I knew them from over eleven years ago. Mike Bordes, Sebastian Holley, & Thomas Drewes had played on a Jesuit High School team that had played in the National Championships in 2008. This was a few months after the 2007 World Cup. I had traveled to Pittsburgh to cheer them on and cover the tournament for DeepSouthRugby.net . That tournament had been the first to grant me press credentials. It seemed a fitting bookend to my retirement hobby of being a Rugby World Cup journalist.

Soon I will be flying home. This is the last match report from a World Cup for this DeepSouthRugby.net reporter. As I hobbled the two miles from the Fukuoka stadium through the darkened streets in search of the subway that would take me back to my hotel, the occasional car headlights pierced my cataract filled eyes with cascades of blinding whiteness. My feet ached. Occasionally a group of Japanese World Cup volunteers with beaming smiles, high fives, and sincere expressions of gratitude in English and Japanese for our coming to their World Cup sparked a little spurt of energy to plod on, but the comfort of streaming matches from the comfort of a recliner was calling me home.