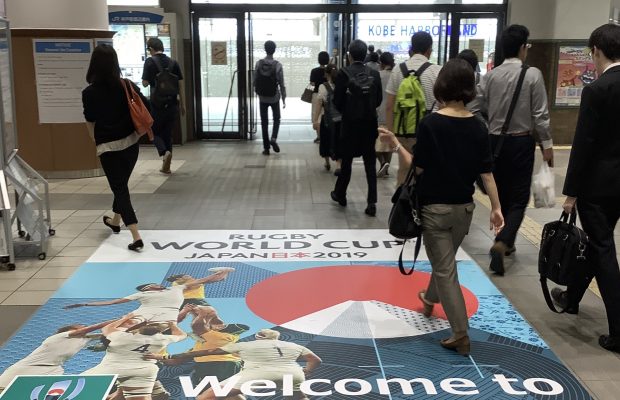 It was game day. The Shinkansen (bullet train) rocketed me down the tracks from Tokyo to Kobe. On board was a smattering of rugby fans that grew with every stop. The train station in Tokyo had a smattering of signs welcoming World Cup tourists including a sign directing “Unfamiliar World Cup Tourists” with Japan Rail cards to where they could get information. On arrival in Kobe the welcome and Japanese World Cup hospitality exploded. There were volunteers smiling and handing us all kinds of information from best way to get to the match to where were the best post match bars.

In a few hours England and the USA would face-off in their Pool C match. A highly unlikely USA victory would have ranked as one of the great World Cup upsets. Previously Japan’s 2015 victory over South Africa had been widely accepted as the greatest upset in World Cup history. Some were tweeting Uruguay’s surprise defeat of Fiji on Wednesday (9/25/19) as the World Cup’s greatest upset. Uruguay was ranked nineteenth in the world going into the tournament and Fiji was ranked tenth. Going into their World Cup match in 2015 Japan was ranked thirteenth in the world and South Africa was third. On that basis the Japan victory squeezed out the Uruguayans’ claim.

The odds’ makers had put the odds of a Japanese victory over South Africa at 500 to 1 in 2015. The odds of a Uruguay victory over Fiji had been 15 to 1. On that basis the Uruguayan claim doesn’t come close.

Going into the match the USA was ranked thirteenth and England was third in the world. That would have made a USA victory at least a tie with Japan’s 2015 amazing accomplishment. World Rugby has a point system to determine the ranking. In 2015 the point system had Japan 13.09 behind South Africa. Going into last night’s match the USA was 15.95 ranking points behind England.

But England’s 45-7 thumping of the Eagles will leave the philosophical ramblings about how to rate World Cup upsets for another time. The USA was never in the match. The USA scrum was totally dominated especially by the rolling maul. After the first English try the USA backs stiffened their defense for awhile, but the gap between the sides inherent quality became obvious. England started with not what one would call their best side. Several star players were on the bench or not included in the evening’s squad. When Owen Farrell came off the bench, the spark a star player can inject in a match was evident. The USA started with its first team, and as England was adding first string players from their bench, the USA was going to its second string as the starters were replaced.

There are better game reports elsewhere, including details and opinions on the USA receiving the first ‘red card’ of the tournament. Flanker John Quill was cited for a dangerous tackle of Owen Farrell with ten minutes left in the match.

The atmosphere at the pitch was exciting if a little strange. Pre-match activities included rice pounding, Ninja dart throwing, and public bathing. Lovely Japanese ladies with never ending joyous smiles and large Heineken backpacks swarmed the Fanzone with plenty of beer. The weather was slightly warm and humid, but nothing anybody from the Deep South would complain about.

At half time the announcer enthusiastically announced, “Let’s get this party started!”

The mellow sound of John Denver’s “Country Roads” erupted into the enclosed stadium. One had to wonder a little at what a wild Japanese party might be like.

In the end it was a wonderful night even if the USA did not provide the greatest upset of all time.