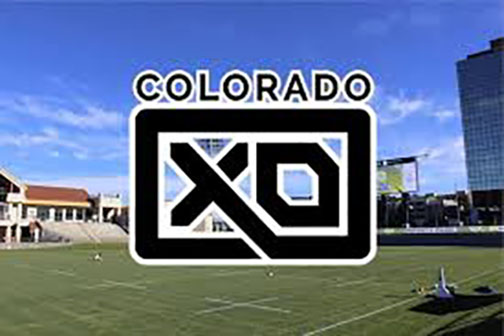 By Fran Thompson
The Colorado XO, a developmental side composed of mostly recruited athletes who had not previously been exposed to rugby, traveled to New Orleans for its debut match and prevailed 26-10 against a New Orleans D-II team sprinkled with a few players from the NOLA Gold Academy on Feb. 27. A GOLD intrasquad match followed what was also the first ever NORFC match at the Goldmine.
Formerly the Glendale Raptors, XO team is composed of high end crossover athletes. Most have only been playing rugby for six weeks.
The team represents the RugbyTown Crossover Academy, which brings athletes from other sports together for intense training in rugby. The hope for the experimental program is that its players learn rugby and get a shot at a professional contract and fill slots on the USA national 7’s and 15’s sides.
Colorado XO also includes players who are back in Colorado to try to hook up with a Major League Rugby team, including former Mount St. Mary’s lock/flanker Campbell Johnstone, who is looking to show MLR teams what he can do and add crucial rugby knowledge to the group.
“Obviously it’s a big experiment,” Director of Rugby Mark Bullock told Goff Rugby Report. “Usually with crossover athletes you have one or two on the team. Here we have almost all of them being crossovers.
“We’ve worked very hard on upskilling the players,” he added. “The key things we’ve been working on is skill, getting them to a rugby fitness levels, and finally pattern of play. We have just started working on pattern of play.”
Bullock’s intent is to not just players to know what they are doing, but know why they are doing it.
“Playing touch can be very helpful because it allows players to understand the flow of the game, and then you can have all kinds of versions of touch—two-hand, clearouts—to work on the game,” he told Goff Rugby Report. “Even so, the first 20 minutes of this weekend’s game will be chaotic for the XO players. That’s why the game will likely be split up into quarters, with what amounts to an extended water break becoming an opportunity for coaches to talk through some issues before the next 20.’’
Players that Bullock said are showing potential to play at the professional and national levels include scrumhalf Michael Bandy, a football player with the University of San Diego, and flyhalf Line Latu. Bullock said Shawn Clark, a tight end at Monmouth University, moves well as a 6-8 lock.
The XO’s also include Gelen Robinson, a defensive tackle from Purdue at hooker and 8-man Casey McDermott Vai, a tight end at TCU, who who played a year with the Seattle Seahawks and prop Taniela Tupou, who was also once on an NFL roster.
“I’m having a great time,” said Bullock. “We really had no experience with working with a team of players like this. We’ve had some time with them, and now we’re giving them a chance to perform and play.”
Colorado XO’s next game is against the Kansas City Blues D-1 side on April 12.
Bullock has said Colorado XO’s six year plan is to be playing a competitive schedule in a European league with a fully American team of crossover athletes, and its ultimate goal is to increase the talent pool in the U.S. enough to win a Rugby World Cup. The USA has yet to advance to the knockout stage in the competition.
“We’re the top sports nation in the world. Our belief is that we need to be a tier one nation for rugby. “In order to do that, we have to have the best athletes that we can get in the United States,” Bullock said.
That is true in theory. But it has still yet to be determined if the Colorado XO players are better athletes than the current MLR players, whether they be from the USA or overseas.