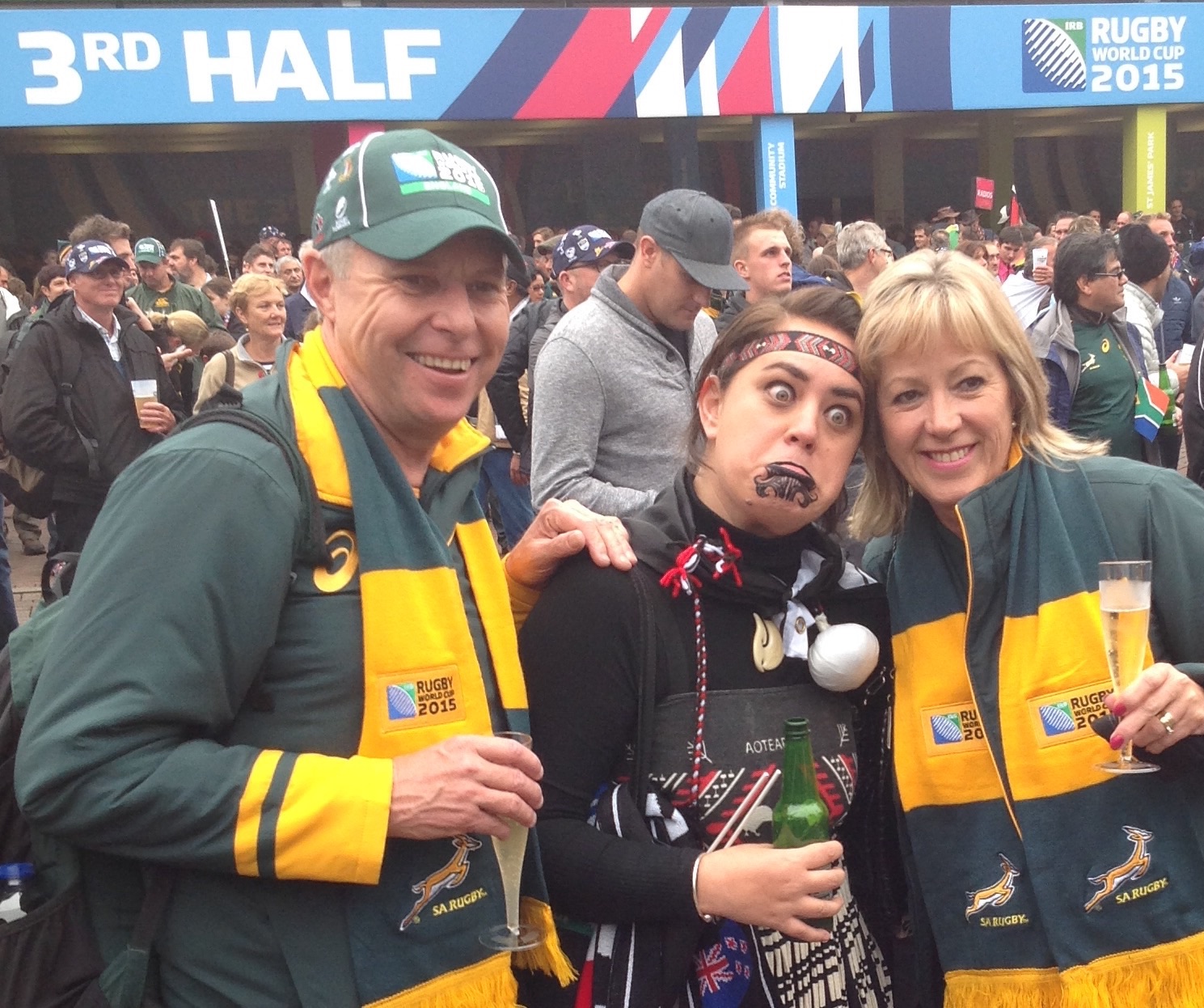 On a drizzly afternoon on the outskirts of London the All Blacks and Springboks brought their rivalry that stretches back to 1921 to Twickenham. In the first 2015 Rugby World Cup Semi-Final New Zealand came in the recognized favorite, but the question of who would go through to the Final was hanging in mist that glittered in the stadium’s lights until almost a minute past full time. Before the match the mind games were flying. The South African coach, Heineke Meyer, complemented the All Blacks on being a great team. The All Black coach, Steve Hansen, retorted that Heineke’s kind words did not deceive anyone about the Springboks’ intentions to rip their heads off.

Twickenham’s Fanzone was packed two hours before kick-off. Heineken flowed. Rhythm and blues boomed from the band on stage. The singer urged the crowd, which was content talking rugby and waiting for the arrival of the team buses, to twist as she launched into Chubby Checkers, “Let’s Twist Again.”

An hour before kick-off fans began entering the stadium. The pre-match announcer got a louder yell of support for the All Blacks. The media support guy brought me the team sheet, and we chatted about the Quarterfinals at Twickenham last week. He told me the media applauded Scotland when they came to the post match conference after their controversial one point loss to Australia. That never happens. At the first media conference I went to in Wellington four years ago I clapped when the Welsh coach, Warren Gatland, and the captain, Sam Warburton, finished their press conference after losing 17-16 to South Africa. The journalist next to me leaned over and said, “We don’t do that.”

When it was ten minutes to kick-off, the big screen displayed highlights from this, “The Best World Cup Ever!” A dance troupe with sparklers and flags from every participating country swayed in the try zones and fireworks exploded around the pitch as the teams jogged out the tunnel. The anthems stirred every heart in the stadium, and then the All Blacks started what seemed a slow motion haka. It was as dramatic as any I have ever seen. The South African fans sliced into the Maori battle challenge by singing, “Ole’, Ole’, Ole’, Ole” as the haka gathered momentum.

At half the Springboks seemed on their way to an upset. They led 12-7. The All Blacks were tossing away their claim to being the greatest team ever with repeated penalties for offside and loose play offenses as they sought every advantage. Six minutes into the second half Dan Carter narrowed the gap to two points with a drop goal. Five minutes later New Zealand legendary center Ma’a Nonu set up replacement winger Beauden Barrett for a try in the corner. The try floodgates did not open like they did the week before against France, but what they had was enough. The Springboks kicked 2 more penalties, and the All Blacks kicked one. With less than a minute to play the Springboks had a scrum 10 meters from their own goal line. As time ran out, they desperately tried to crack the Kiwi defense. There were 90 meters of firmly held All Black territory to cross, and the rain was coming down harder. A knock-on was inevitable. New Zealand won 20-18 and went through to play in the Final against the winner of the Australia/Argentina Semi-Final.

South Africa would have one more match in this World Cup when they would face the loser of the Australia/Argentina match for 3rd place in the Bronze Final. The Springbok coach didn’t help sell any tickets to the Bronze Final when at the press conference he said 3rd place didn’t mean that much. He went on to add, “It is like kissing your sister.”