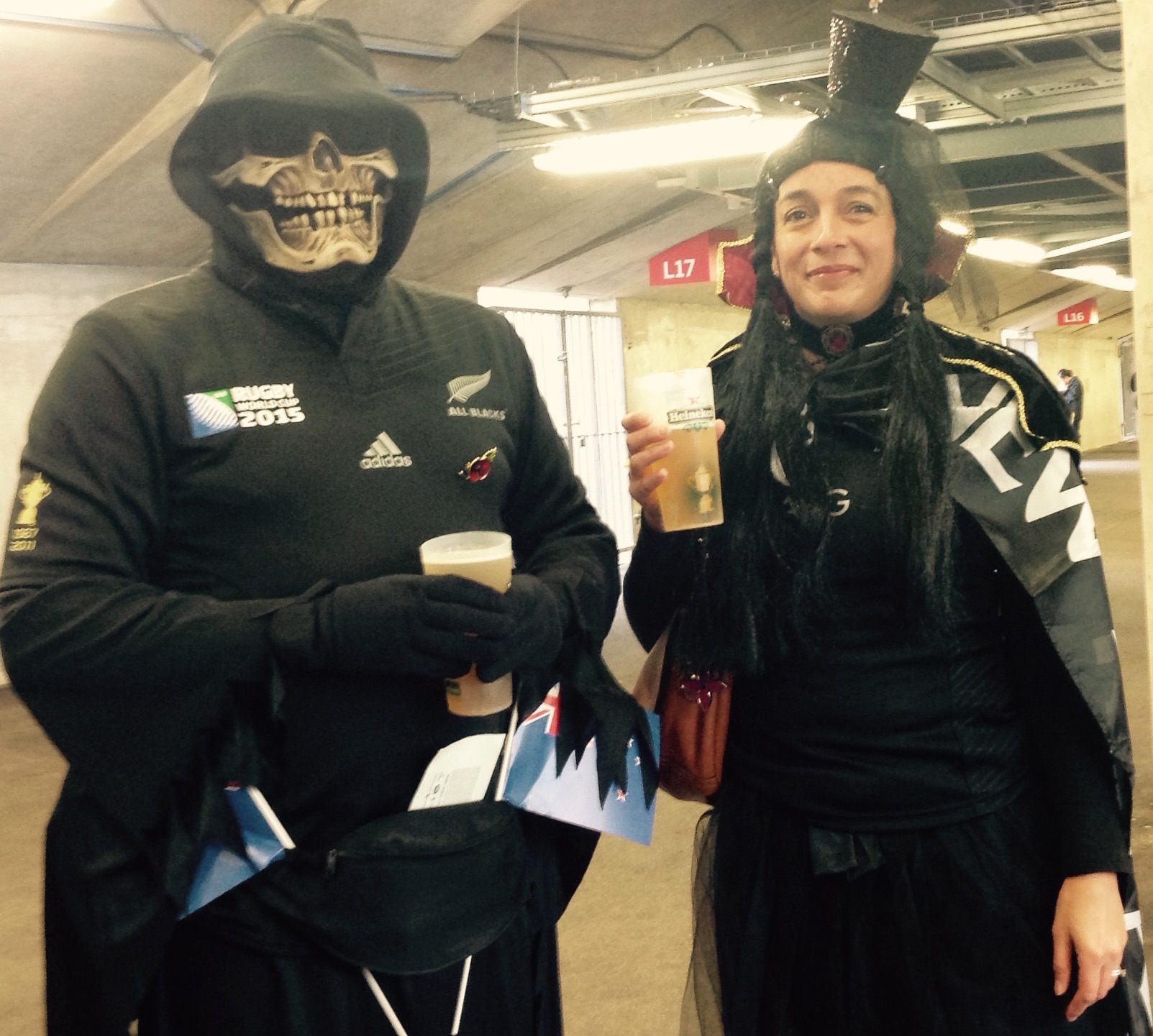 It was the day of the 2015 Rugby World Cup Final and rugby’s biggest rivalry would be played out on its biggest stage. The All Blacks seemed to have the early lead in crowd support and costuming effort. It was Halloween in London and some early Trick-or-Treaters could have been mistaken for All Blacks’ fans. I made that mistake early in the morning coming out of a Tube station. They were a group of Halloween ravers going home after a good night and looked perplexed when I tried to get a “Go All Blacks!” from their bleary faces.

Outside Twickenham two hours before kick-off touts cruised the edges of the crowd looking for spare tickets to buy while other touts slyly offered tickets for 500 pounds. Groups of World Cup volunteers got last minute instructions. A brass band launched into “We Are Champions” and volunteers shook pompoms almost in time to the music. Emotion seeped from the sidewalk and floated in on the sunshine.

In the Fanzone the big screen showed a countdown of the ten best tries of the tournament. Number one was the Japanese game winning try against South Africa. The crowd cheered once more for the Brave Blossoms. Andy Goode, ex-English player, welcomed Aussies and Kiwis to the home of English rugby. There was the slight insinuation that this was the greatest World Cup in history because the English played the greatest of hosts by bowing out so these great rivals could finally meet in a World Cup Final. Like an English person who nibbles away at a shared desert politely leaving the last bite for someone else, this Final was graciously left by the English for their colonial offspring.

An hour before the match, security scoured the seats. Fans lined the VIP entrance to try to glimpse royals and VIPs and to cheer on their team’s arrival. Beverages and good cheer were everywhere.

Minutes before kick-off fireworks announced the teams’ entrance. The national anthems rang out from every cranny of the stadium. The crowd’s enthusiasm surged through the eighty minutes as teams attacked or defended well. The retiring All Blacks (especially McCaw, Carter, and Nonu) brought a level of play equal to the occasion. Nonu’s try in the 2nd minute of the second half was a statement of the All Black’s desire which the Wallabies would not be able to surpass. After being down 16-3 at half the Aussies would pull back to within four with only ten minutes to play. A Dan Carter drop goal in the 70th minute sent Wallabies into desperation mode and two ensuing mistakes led to another three points from Carter and with only a minute to play a culminating try by reserve winger Beauden Barrett. The Wallabies were left hopelessly behind 34-17 with seconds remaining.  After 44 days and 48 matches the All Blacks were the only unbeaten team. For the first time in World Cup history a nation had retained the Webb Ellis Trophy.

After pitch side interviews, medal and trophy presentations, and more fireworks, the All Blacks circled the stands applauding their fans. When they came around to the tunnel to leave the pitch, they hesitated. Then slowly they formed their ranks. For the last time this All Black team which will be considered by many as the greatest team of all time performed a haka for a World Cup crowd.