10-9-15 Waning Days Wading through the Pools 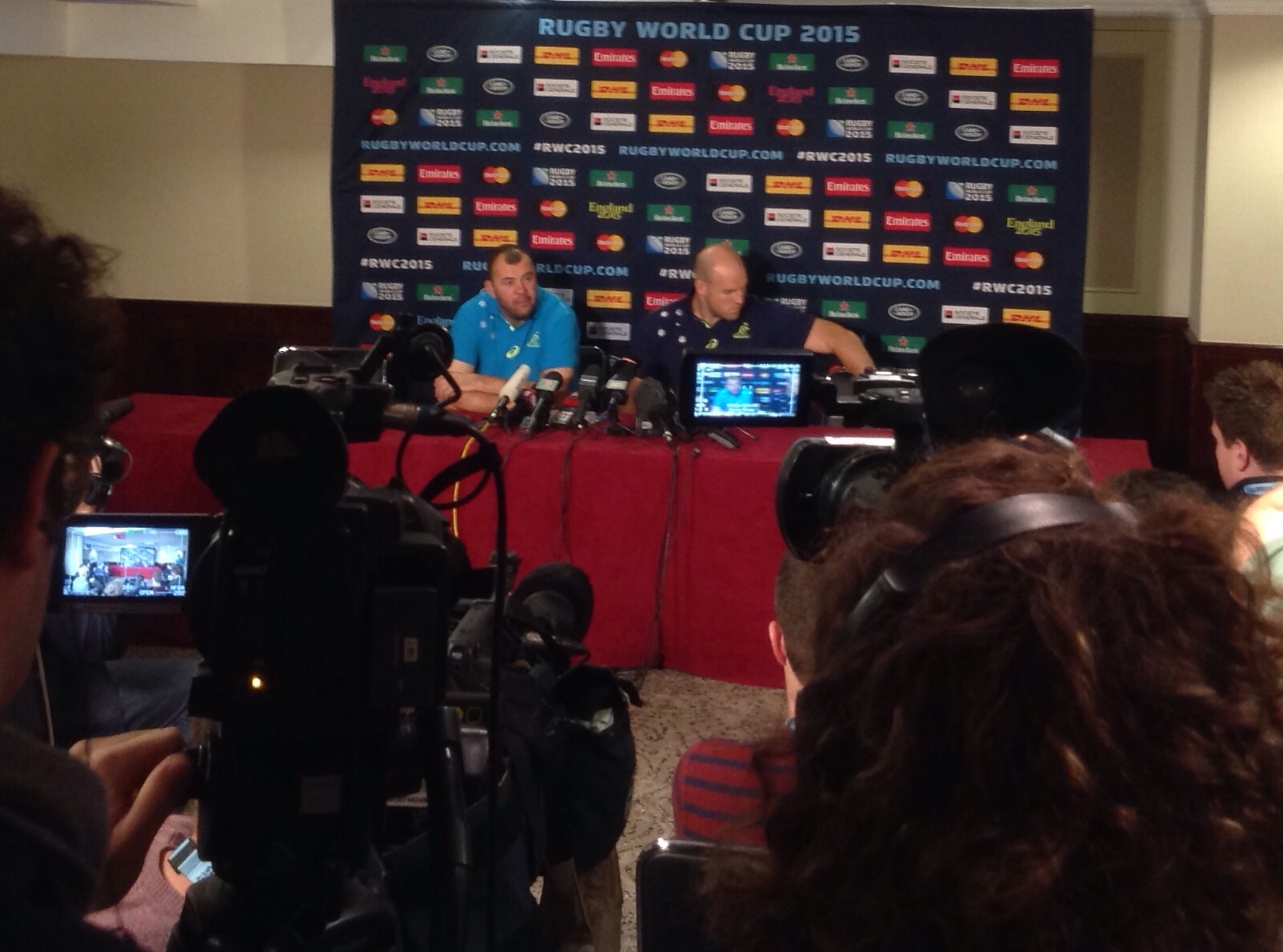 With 8 matches left before the knock-out round, the pools are about to dry up. Canada, Fiji, and Georgia can already go home. South Africa will hang around to try to show the world their loss to Japan was truly a fluke when they face the loser of Saturday’s match between Australia and Wales when the quarterfinals start on Oct. 17th.

Early yesterday morning I wandered the cool, sunny streets around Victoria Station looking for an Australian press conference. Children were biking and scootering to schools with cathedral spires stretching to heaven and watching over the tiny voices that shrieked in play below. Residents stood outside B&B’s in robes and slippers having their first fag of the day. I arrived to find a wall of cameras and no seats. Australia, the team playing the best rugby in the toughest pool, was news for everyone. Coach Cheika fielded questions with the skill his team has shown on the pitch. There would be no pride before a fall. They were a team taking one match at a time, learning from every phase, and avoiding thoughts that they had momentum that would carry them past a tough Welsh side. Saturday would be game one, and when they faced either South Africa or Scotland (Japan?) in the quarterfinals, that would be game one, again.

Wales and Australia are tied at 13 match points. If they draw on Saturday, the winner of the point differential decider will be Australia, 97 to 58. Wales will get South Africa in the quarterfinals and Australia will most likely face Scotland. The match right before Australia vs Wales is Scotland vs Samoa. If Scotland loses and Japan beats USA on Sunday, Japan becomes the 2nd place team in Pool B. There are other scenarios involving draws which I won’t waste words on. If Scotland and Japan end up with the same match points, Scotland will go through because they were the winning team when they played each other.

Pool C has been called the Pool of Snores. As expected New Zealand will top the pool with Argentina second. The only burst of caffeine as the final pool weekend approaches had been the strength of Georgia. Talk of expanding the 6 Nations tournament and possibly adding a relegation spot began to dwindle Wednesday as Georgia napped in their one point win over Namibia. Today New Zealand has set their alarm to awake from the bed of mediocre performances they have produced so far. Tonga, with only one win against Namibia, will valiantly dream they have an upset in them and this is their last chance to show it. Saturday Namibia will finish a winless World Cup with a brief delusion they can cause an Argentine nightmare. But even if these two highly unlikely upsets occur, New Zealand and Argentina would still finish 1st and 2nd in Pool C.

The penultimate pool match will decide Pool D. Ireland doesn’t have to beat France on Sunday to avoid the All Blacks in the quarterfinals. A draw will put Ireland through as top of Pool D. They are currently tied with 14 match points. If their match on Oct. 11th ends with the score level, the decision of who wins the pool is based on the point difference between points they scored and points scored against them. Ireland has an 84 point difference to France’s 72. France has to win or they will face the All Blacks in a quarterfinal in Cardiff. Or is that the briar patch the wily French cockerel craves – 2007 all over again?

Thoughts on the USA Eagles
A highly unlikely win over Japan in the very last pool match will lift Coach Tolkin’s Eagles from the disgrace of going winless and suffering the worst Eagle defeat in World Cup history. The previous record was set by Coach Eddie O’Sullivan’s Eagles in their 67-5 loss to Australia in 2011. The ten try, 64-0, shellacking Tolkin’s B-side took from the Springboks on Wednesday moved the record point difference up 2 points. Below are comments on the match from DeepSouthRugby.net’s long time friend, Jack Redwater of the Jack & Dougie Rugby & Whiskey Radio program:
(Editor’s note – Some editing for syntax and supposed typos)

“Why concentrate on the first half? Matches are 80 minutes long. If you put a positive spin on the first forty you are ignoring the real heart of the match. The truth is abundantly clear that we are athletic rugby players but not natural players.
A perfect example of a confused player is the interception of Du Preez. Blaine Scully had no support and in his mind immediately in the first ten yards must have been:
1. I am all alone, shit!
2. Can I out run the two maybe three South Africans chasing me?
3. What should I do? Or what can’t I do?
A thirty yards and closing ,
4. The options now are to put the foot to the ball straight ahead and chase it or cross kick and hope that whatever support I have is in the middle of the pitch.
5. Pin my ears back and make the opposition tackle me but don’t look back. If they tackle me, I must try to stay in bounds as they will try to get me out of bounds and get the lineout.

But he made the classic gridiron mistake and that was to slow down and go back inside which allowed all the opposition to close on him.
And we lose a try as simple as that.
The other try gone begging is when the tight head knocked the ball on at the goal line.
The best move of the day was the MOHAWK hooker picking and going and making the break with nobody within ten yards of him.
We simply do not have the proper anticipatory knowledge which I strongly feel is the fault of the coaches. How can a coach teach what he doesn’t know?
Once again that is my tuppence.
It wouldn’t have mattered who we had out there. It was gong to be bad.
It’s such a bummer to see this because what it tells me is we are not keeping pace with the other minnows.
I thought Hayden Smith and the back row were liabilities . Zach Test played okay, surprisingly, but Danny Barrett is not a fifteens player from what I have seen.
Todd Clever would have been a big plus.
Your Man in the Homeland,
Grouchy Jack?”

A lovely fall day with temperatures in the low 50’s is forecast for the pool stage finale in Gloucester. Has Tolkin cleverly positioned his Eagle squad to upset Eddie Jones, who masterminded his Brave Blossums of Japan to the greatest upset in World Cup history just 3 weeks ago? Or does another Day of Infamy await?