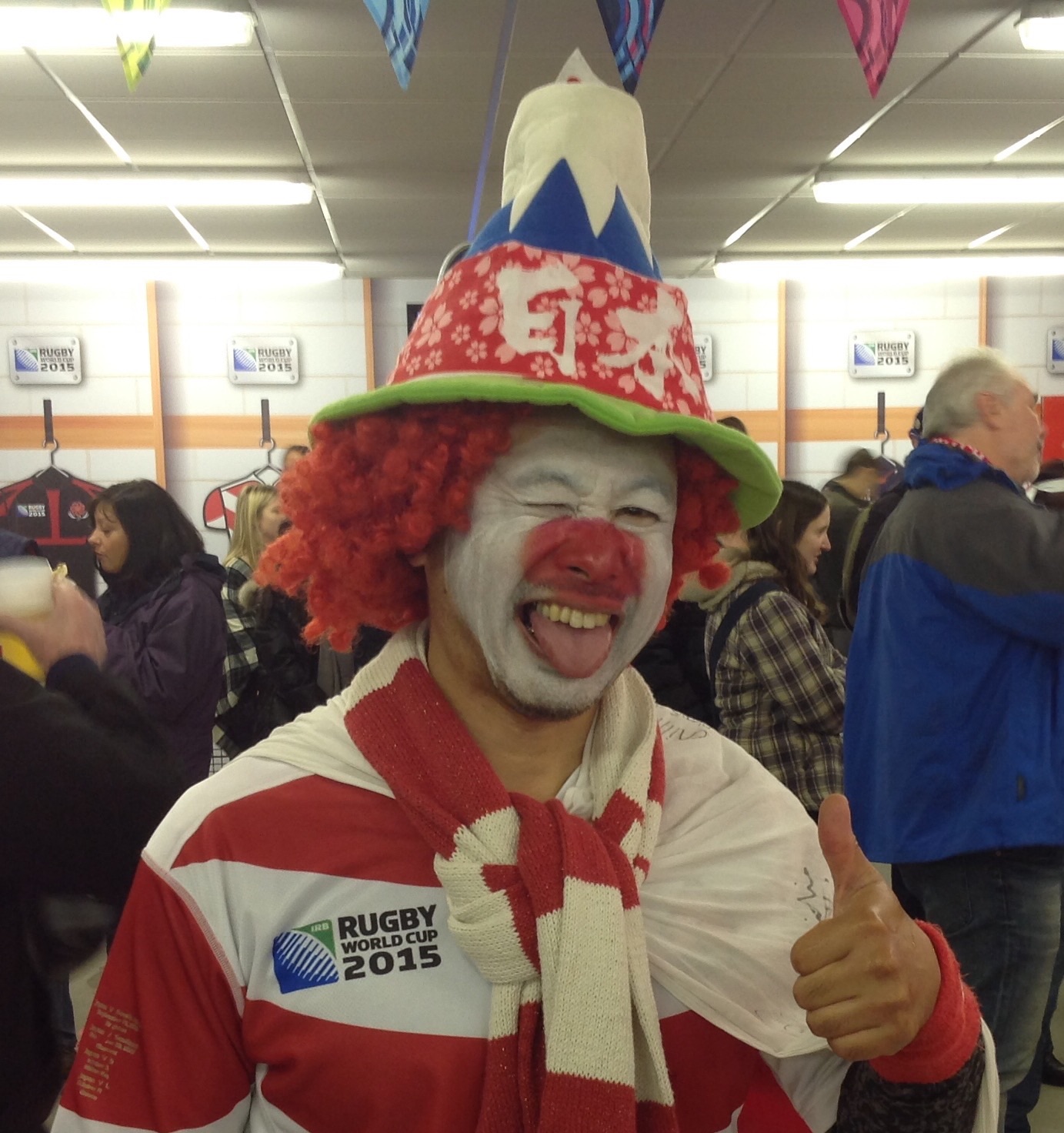 Thirty minutes before kick-off the teams were on the pitch warming-up. The announcer went through the USA’s record in this World Cup. He explored the motivation of each team to win. ‘The USA does not want to go home winless with their tail between their legs. Japan is looking to triple the best record any Japanese team has even had in a World Cup and be the first team to ever win three pool matches and not get through to the quarterfinals.’

As the stands filled, “Ni-ppon clap-clap-clap” competed with “You-Ess-Ayy” to show dominate crowd support. The announcer went around the stadium asking who fans supported. If they weren’t from the USA, they were backing Japan. Although the Eagles had won both previous World Cup encounters and had beaten Japan a little over two months prior, they were the underdogs.

The USA’s early 3 point lead from a McGinty penalty kick in the 3rd minute quickly vanished as Japan scored a converted try in the 6th minute. As a chill began to seep into Kingsholm stadium it was clear this would be no repeat of the Eagles win over Japan in California in July. By the 15th minute the Japanese fans cries of Ni-ppon clap-clap-clap had the USA fans drowning out the claps with You-Ess-Ayy. It was like everyone was cheering for both teams.

In the 24th minute a try by USA star winger Ngwenya, his only try of this World Cup, put the Eagles briefly ahead. Two minutes later Japan drove a maul over the line and that was the last time the Eagles would be ahead. Ten minutes before half a few Eagle fans lost any hope of swaying anyone who might be leaning to support the underdog as, to the shame of most Eagle fans, they yelled to distract Japanese fullback, Goromaru, as he slotted a penalty kick to make it 17-8 at half.

In the second half Japan scored 11 points to the Eagles 10 to make the final score 28-18. Not bad against a side that had beaten South Africa three weeks earlier. Although the Eagles were going home winless, their tail was not between their legs. They had 2 halves of rugby from the eight halves they played in the tournament to crow about. The first being when they led Scotland 13-6 in Leeds before losing 39-16, and the b-side’s holding South Africa to only 14 points in Queen Elizabeth Olympic Stadium before the Springbok 64-0 tryfest began. The players were moving on with their lives and going back to their day jobs whether they were rugby related or not. For many this would be their last and possibly only World Cup and they had good memories.

At the post match press conference Japan coach Eddie Jones said this was their toughest match of the tournament because they were not playing for anything. Scotland’s win over Samoa had closed the chance of making the quarterfinals, and the USA were a desperate side looking for one win in this 2015 World Cup. He talked about the specifics of taking a small team and making them a quick attacking side against the increasing larger and larger defensive teams. Creating a good attacking side is harder than creating a good defensive side. Being an attacking side opens you up to risk of turnovers, but it was what Japan had to do. He used the previous evening’s tryless clash between Australia and Wales as an example of a great test match between two great defensive teams. He leaves Japan to go to a professional South African team, the Cape Town DHL Stormers, a much loved coach.

The USA coach, Mike Tolkin, rolled out banalities about losing momentum, simple errors, and letting Japan back in the match at his post match conference. At the end of the match and tournament it was clear to most that the Japanese were quicker, fitter, and better coached. What will happen to Tolkin now that the much touted best USA side ever disappears from the World Cup with 2 good halves, no wins, and the largest losing deficit in the tournament? It won’t be to a top professional team with a nation of rugby fans waving signs that say, “We Love You, Mike”