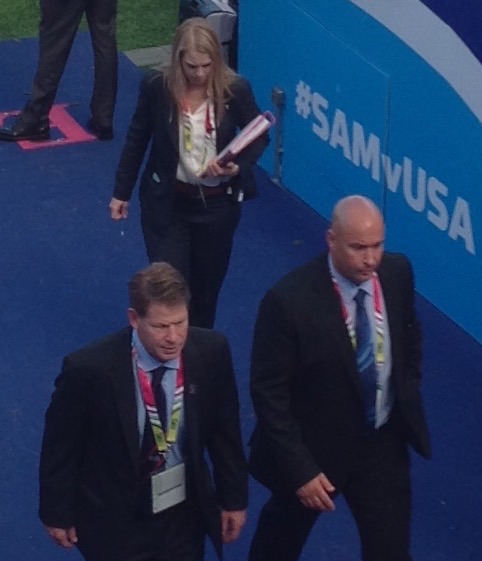 Yesterday as I watched Georgia’s 54-9 losing effort against a very good Argentinian side at the Fanzone in Leeds, one of the multitude of magical World Cup moments happened. At the table where the Thompson boys and I sat was Brian, originally from the town of Rugby but now living in Arizona. In 1977 Brian lived in Vancouver and toured with the Vancouver Rowing Club to play the New Orleans RFC. We played against each other 38 years ago and some 4,000 miles away. The sport we love had brought us together again to enjoy the cool Yorkshire evening, marvelous hospitality of this league loving city, and rugby,

The matches during the week saw little change to my pre-tournament knock-out round predictions. Australia failed to get a bonus point for 4 tries in their 28-13 defeat of Fiji. The significance to this in the “Pool of Death” will wait until they face Wales on Oct. 10th. The Brave Blossoms’ 45-10 loss to Scotland displayed Japan as a budding rugby power, but not yet fully blooming. South Africa has a way back to the the top of Pool B if their aging stars shake off their loss to Japan and embrace a will to win. In Pool C Argentina showed their strength in a 26-16 loss to world champion New Zealand and last night’s romp against Georgia. New Zealand floundered a bit during a 30 minute span in the second half against Namibia where, with a man advantage for most of this time, they managed only 2 tries while Nambia scored one. The final 58-14 score was a credit to the fierce defense of Namibia, but causes one to wonder if the All Blacks were intentionally hiding something. France looked good in their 38-11 victory over a tenacious Romanian side, leaving little doubt that their Oct. 11th confrontation with Ireland will decide who finishes first and second in Pool D.

Last night as we wandered the streets and marveled at the long lines of young people waiting for often over an hour to see if their clothing would pass inspection so they could enter a crowded bar, we pondered why this small city in the north of England developed such a culture. While pondering we entered a karaoke bar with no line. I took a slip and wrote “Suspicious Minds” on the paper, dropped it on the stack, and waited to do my Elvis impersonation. After close to 45 minutes of karaoke ranging from Adele-like fantastic to cover your ears and pray it ends soon, the karaoke master started reading from the stack. Suspicious Minds got the thumbs down. I stomped out, straightened my clothes, and took my place in line.

Soon I’ll board a bus to the stadium in Leeds to cheer Canada on to hopefully a North American upset over Italy. Like tomorrow’s clash between USA and Scotland, few give the North American sides a chance against the Six Nation teams. Yesterday while strolling to the Fanzone we stopped to chat with one of the the USA coaches as the team boarded a bus to practice. DeepSouthRugby.net photographer, Mickey O’Thompson, asked if they were going to work on line-outs. The coach assured us the line-out problems from the 25-16 loss to Samoa had been sorted. We’ll see. Can the magic of this Yorkshire city inspire a North American upset?