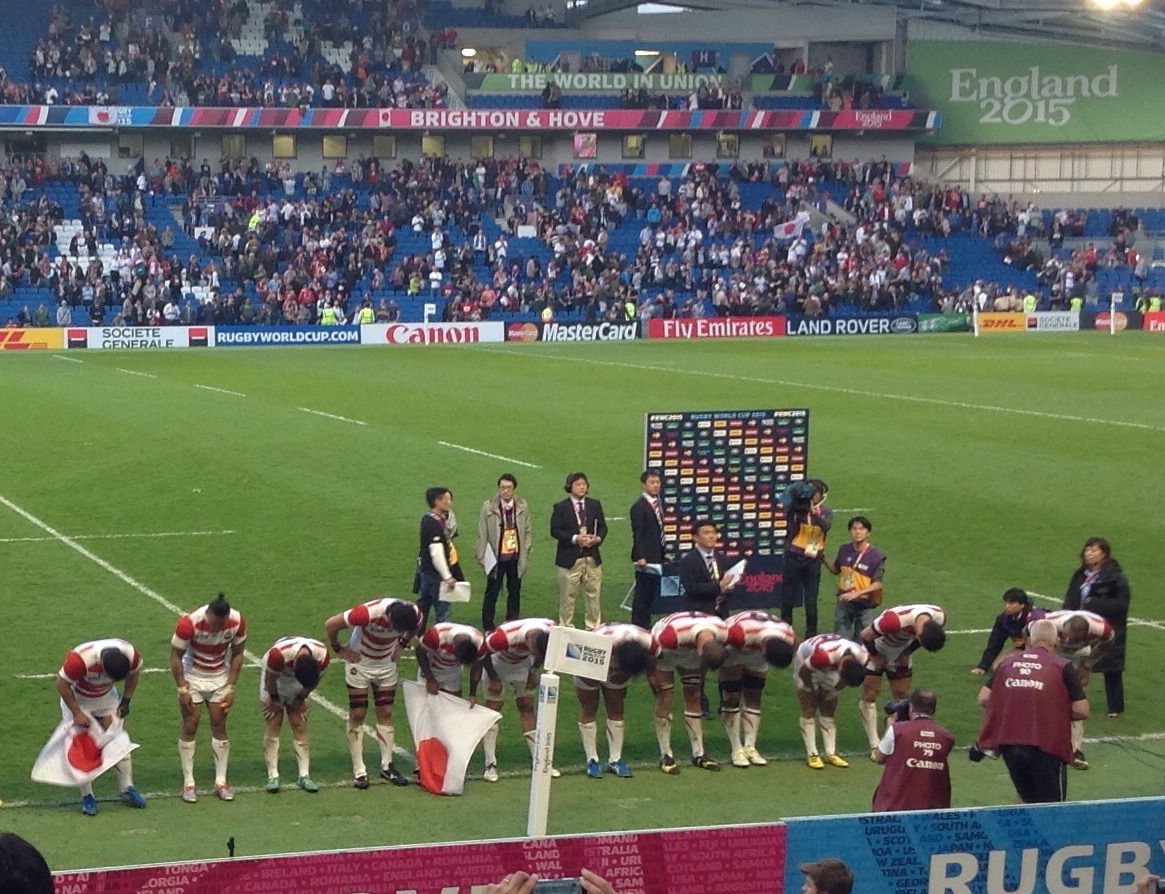 It is Day 3 of the 2015 Rugby World Cup and the impossible has happened. Yesterday Japan, ranked 13th in the world, defeated South Africa, ranked 3rd, 34-32. In what is the greatest upset in the Rugby World Cup history the Brave Blossoms of Japan swarmed the mighty Springboks from South Africa. Within a minute of kick-off it seemed evident to the Japanese players that they had the talent and desire to win. For the almost 30,000 rugby fans watching the first rugby match ever played in Brighton’s new soccer stadium the belief that this could happen would wait until the 83rd minute of the match when Japan scored the go ahead try. The South African fans sat in stunned disbelief. The Japanese fans stood in jubilant disbelief. Everyone realized they had just seen a match that would be talked about whenever World Cup upsets were mentioned. A tiny second tier nation had toppled one of the rugby giants from the Southern Hemisphere.

The result created endless opportunities for an evening of fun at the Springboks’ expense. Delightedly when sitting in a pub with South African’s nearby we would discuss the USA’s July victory over Japan and end with the question, “Has anyone else beaten the Japanese recently?”
Springbok dreams of winning the World Cup are not dead though. While visiting the toilet in one pub, I overheard one South African supporter discussing with his mate how it was better for the team to finish second in Pool B. I took the opportunity to mention there was now a reasonable chance that 4 teams in the pool could finish with 1 loss and point difference could determine that the Springboks, for the first time in their World Cup experiences, would not be advancing to the knock-out stage. The solid belief that the would win their pool was replaced with fear they would be going home early.

On Day 1 English fans at Twickenham for the opening match against Fiji were pleased with their comfortable victory, but sloppy play and Fiji’s ability to move the ball well against the English defense silenced chatter of this being a side that would win their own World Cup. The last 10 minutes when O’Farrell and Burgess were broughtt on as replacements sparked a glimmer of hope. Resurgence of English fans confidence will wait until Sept. 26th when they face Wales.

In 30 minutes the  USA Eagles and a Samoan side that will be packing a good bit more wallop than the Samoan side that easily handled the Eagles in July will kick-off. As Japan showed the impossible does happen. Go Eagles!